Drive is the pulse-pounding slot by developer NetEnt that takes place in the future where different racers fight each other on the road, using multiplier Wilds and free spins to beat each other to the finish line.

This slick-looking slot came out in 2016, being developed and released by veteran NetEnt. There are a lot of things you can say about this production company but they always deliver slots that look amazing and often introduce different original features. With Drive: Multiplier Mayhem they take their foot off the gas when it comes to the features but they compensate by making sure the slot looks amazing.

The game puts players in the driver’s seat of a series of illegal street races, taking place sometime in the near future. While playing the game we’re treated to a grand view of a futuristic city skyline, while a slick racecar drives along with us in the bottom left corner.

The 5-reel, 3-row playing field hangs in the air, covered with 15 win lines and filled with different symbols. While the low-paying symbols are unfortunately just simple card letters, the high-paying symbols are represented with the 4 main characters as well as cards and animated Wilds. These Wilds also grant multipliers to any wins they’re a part of, which I’ll get into later.

I want to give a special mention to the sound as it fits the style of the game perfectly. We’re treated to a rhythmic, thumping techno song with a heavy beat. It’s excellent driving music on its own and thus also fits the setting. Special sound-effects, of course, include revving engines and various other racing sounds.

Drive is a Medium Volatility game through a combination of features that appear quite often and a large collection of different symbols. The symbols all look sharp and detailed but the low-paying car letters simply lack creativity. They are made to fit the chrome, futuristic style of the game but also feel very out of place.

The characters that are used as high-paying symbols obviously fit the setting a lot better, and each of them is very easy to tell apart. They also impact the slot as you will have to race each of them in turn in order to get the biggest wins during the free spins mode.

I thought the game doesn’t go out of its way to introduce strange or new concepts, but focusing on developing those that are already popular and making sure these were implemented well. Getting a win across one of the win lines would have them light up quickly. If there was a big win, I was treated with the car in the corner boosting its speed to the point that lightning crackled out from under the hood.

The slot doesn’t make too much use of different features, but they appear often enough to feel like a part of the game. That said, the free spins mode didn’t activate very frequently but did have a big impact in terms of total win. Of course, this is not a guarantee.

The features you can find in Drive are:

People who are familiar with video slots in any capacity will probably be familiar with these features already. The game doesn’t really do anything new with them, although the combination of Wilds with Multipliers is rare. I also thought that was the best part of the game.

The free spins mode is largely the same as the base game but it does have some special elements that make it more likely to get a big win. First off, you need to trigger it though which I found to be pretty hard to do. I wouldn’t say this mode was rare but during my time playing it didn’t trigger as often as I would have liked! Then again, it did pay off sufficiently to make up for the long waiting period.

Once the Free Spins mode activates, the game shifts into an illegal driving competition. The goal is to beat each of the 3 opponents in 4 separate stages before the free spins run out. Winning against an opponent will add free spins as well as adding another Multiplier Wild to every spin.

You start each Free Spins mode with 10 free spins against Twitch. If you beat him by gathering 3 Nitro symbols on the playing screen, you move on to Hamaki with an extra 4 free spins and 1 Multiplier Wild on every spin. Beat him and you move on to Bruiser, who you will face for both level 3 and 4. You will only receive an additional 3 and 2 free spins to do this, respectively.

I thought this was a fun way to handle the free spins mode as well as introducing better elements to the mode as time goes on. Getting to another level will make sure you are getting bigger rewards, which is ultimately the goal of the free spins mode.

During my time playing, I found this to easily be the time where I got the biggest wins, but even without it, I had some pretty big wins during the base game as well. Keep the nature of the slot in mind though, as another time I played I blew through my funds very quickly. The game does let you pick a bet between £0.15 and £75 per spin to mitigate the risk.

Drive is a slot that still keeps up with some of the newest slots in terms of design and sound. The game looks great even though there aren’t quite as many animations as some other slots, but it uses what it has to create the idea of movement nonetheless. The soundtrack is thumping and I actually enjoyed just listening to it even when I wasn’t paying attention to the slot itself.

The features are rather simple but feel like the appropriate amount for a slot like this. It changes up the core gameplay enough to keep things interesting but isn’t so extravagant that it will turn away all but the most hardcore modern players. This is a nice middle ground that a lot of NetEnt slots find themselves in.

A final thing to mention is the sizeable max. win of 18,000x your bet! Don’t count on it dropping very often but the fact that it is a possibility definitely kept me playing a little longer than I had to. Just keep an eye on your funds while you play, as I found quite some time between big wins.

Browse casinos with Drive and other slots from NetEnt. Create an account and try the game for free before making a deposit.

You can play Drive in English, Finnish, Swedish, German and 20 other languages. 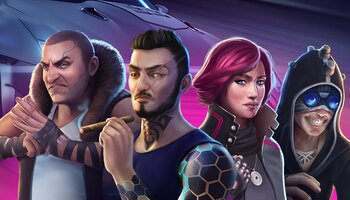