Dream with the druids and visit the relaxing forest. Their dreams are filled with re-spins, free spins and stacked wilds.

NetEnt released Druid’s Dream in the spring of 2020. The game takes the player on a relaxing journey to the forest and lets your mind unwind. This is not a tense or volatile game, but rather a calm walk in the woods.

The best part of the game is the theme. The slot looks and sounds amazing, but there is a bit of a disconnect between the theme and the mechanics. It’s like this was a beautiful project, which needed to have a slot somewhere in there.

The slot is nice, but I enjoyed the game and the theme separately. Just don’t spend too much time trying to actually read the rules. They are not very clearly written and can cause headaches.

Druid’s Dream is, as the name implies, a dream-like experience. Everything is calm, slow and smooth. This game isn’t trying to raise your heartbeat with excitement. It just wants you to sit back and relax for a moment.

The colour scheme is very natural and everything looks organic. The lack of vibrant colours isn’t an issue, as all the symbols are easy to tell apart. The slot has a natural look and is easy to understand.

What I like most about the design is the music. I ended up leaving the game running for a long time after I stopped playing, just so I could still listen to it while I worked.

The sound effects are also very organic and natural. There are no mechanical clanks or beeps, but rather the sound of leaves rustling or the gentle ring of a bar chime.

The animals and the druids have taken over the reels. Every single symbol is a fitting part of the theme. There are low-tier runes and the high-tier symbols are musical instruments and animals. There are a total of 8 basic symbols, and a scatter and a wild.

There is quite a leap between the runes and the high-tier symbols. All of them have fairly low wins, but the runes are something else. Even getting five of the best rune in a single payline will not give you your bet back. There is a reason for this, but it’s pretty devastating reading the pay structure.

The way the game works is that there’s a ton of wilds, the paylines pay both ways and the symbols are stacked. So when you win, you get multiple wins at the same time.

Wilds in this game are great because there are so many of them. You have regular wilds on reels 1, 3 and 5 during the base game and re-spins, stacked wilds on reels 2 and 4, and during the free spins, you get stacked wilds on reel 3 as well. Those wilds can then be charged up and locked if you also get scatter symbols on correct places. Yeah, I know how that sounds. This is messy, but luckily you don’t actually need to care about any of that.

What you need to care about are the special features. The druid scatters are the single most important symbol in the game and you want to see those as often as you can. A single druid can give you re-spins and getting both of them activates the free spins. That’s where the big wins are and that is what you need to aim for.

It is a bit easier to win in Druid’s Dream, because the paylines work from both ends of the screen. You can win from left to right and from right to left. A payline can only have a single win, so if there are multiple, only the most valuable will be paid.

The druids can charge up your wild symbols and give you a handful of re-spins. If you get a stack of wilds and a single druid scatter at the end of it, those wilds will be charged up. You get as many re-spins as you have charged wilds and the wilds are locked in place.

During the base game and the re-spin feature, you can nudge your wild stacks. If you have a single druid visible and the other wild stack shows up, it will be nudged slowly. It will always go to the direction of the second druid and if the symbol shows up, you activate the Free Spin feature.

When both druids show up on the reels at the same time, the Free Spin feature activates. You get 6 spins plus 1 for each charged up wild. Both druids are then turned into wilds and the visible stacks on reels 2 and 4 are locked in place.

During the free spins, reel 3 will get a new stack of wilds and a scatter symbol. If the bear symbol shows up, you win 3 extra spins.

Druid’s Dream is a beautiful game and a relaxing experience. If you just look and listen to the game, it is one of the most calming slots I have seen. Unfortunately, the same can’t be said about all of the mechanical parts.

The first issue I had was with the rules. The game has so many small variations depending on the game state that the rules become messy. I had a hard time understanding them, even though I have gone through thousands of slots and know how these games usually work. My suggestion is that you just play it and learn by doing.

The second problem was with the balance. I felt that the base game is too weak for a low-volatility game. The special features are good, but their role is too big. If the game had higher volatility, I would have totally understood this choice.

After all is said and done, I still might play a round or two every now and then. A bad NetEnt game is still above average when compared to all the others.

Browse casinos with Druids’ Dream and other slots from NetEnt. Create an account and try the game for free before making a deposit.

You can play Druids’ Dream in English, Finnish, Swedish, German and 20 other languages. 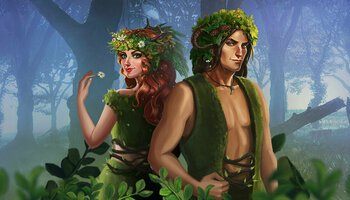