With a name like Ducks Till Dawn, you know this is going to be one creepy slot. But I have to admit it didn’t go the way I was hoping. The name is a pun on the classic Quentin Tarantino’s From Dusk Till Dawn (if you haven’t watched this I urge you to because it is one stellar movie). And I was hoping the slot would take the direction of the movie with some added ducks.

Instead, this is a game that is set in a creepy fairground. In the background, there is a brightly lit carousel but the surroundings are darker in nature. In this 6-reel, 3-row slot with 4,096 ways to win you need to shoot down fowl as if you were in a fairground playing Dunk the Duck.

Despite being set in a fair, this is no sweet, innocent game. The mystic is the one controlling all the strings and the ducks look borderline evil. The prizes up for grabs may as well be possessed and have certainly seen better days. The music perfectly suits the eerie atmosphere with FX to match.

As this slot is built on a Ways Pays mechanism you can win when symbols appear in any position on consecutive columns from left to right. That means that you can win in more ways than 1 with the same symbols clustered together as long as they span 3 or more consecutive reels.

As the reels spin, you will see ducks moving across from right to left. If a set of crosshairs aims down on the ducks then this is shot down and the player will win the amount shown on the duck. If multiple crosshairs land on the ducks the win can be multiplied by 1, 2, 5, 20, 50 or 200x. This is where the high volatility comes in.

On top of the reels, there are two meters around two orbs (a red on the left which is known as bonus level 2 and a blue one on the right known as bonus level 1). These orbs symbolise the bonus round with the red having a possibility of 10x wins and the blue having a possibility of up to 5x. During the base game, as you are going through spins these two meters are filled. Once the meter is filled it will add an extra free spin to the bonus round and restart counting again. A maximum of 15 free spins can be added to both meters.

Whenever 3 or more bonus symbols appear anywhere on the reels the free spins round is triggered. These can either be a red or blue orb. If entering the Red orb free spins round the crosshairs multipliers shooting the ducks can go up to 10x and 5x in the Blue orb round.

The number of scatters will also determine the number of free spins added to the number shown next to the orbs above the reels. Three orbs will offer an extra 5 spins, 4 will add an extra 8, 5 an extra 15 and 6 orbs an extra 20 spins.

If you’re not a big fan of patience you can pay to go straight into the bonus round. Players can go straight to the Free Spins game and get higher crosshairs multipliers.

Whenever a sizeable win is registered the gamble feature will make an appearance. In this game, you will have the chance to double your money and there is a 50/50 chance of winning or losing.

This game is said to have an RTP of 97.6% however, I struggled to see this during gameplay. My money was being drained and I was getting little to no wins. I guess that is normal when considering this game has a volatility rating of 8/10.

I didn't find it too hard to get into the bonus round but considering how much money the game took from me I expected better than a 56x win and a 28x win.

Having said that, I can certainly see the potential for big wins in this game. Entering the red orb bonus round can easily stack up the wins and with the possibility of a second multiplier when hitting more than 1 duck, the possibilities for a jaw-dropping win is there.

Play Ducks Till Dawn for free

Browse casinos with Ducks Till Dawn and other slots from Kalamba Games. Create an account and try the game for free before making a deposit.

You can play Ducks Till Dawn in English, Finnish, Swedish, German and 9 other languages. 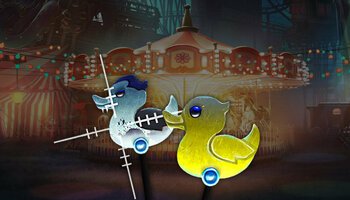