Dwarf Mine has us following an ambitious Dwarf deep under the ground as he strives to uncover the biggest treasures in his very own mine by using his expanding reels machine!

This slot was released in 2019, making it one of the newest creations by developer Yggdrasil. This shows in both the graphics and the features, which are quite impressive. The entire game is set deep inside the titular Dwarf Mine, with all the art and details enforcing that idea.

The game starts with a 5-reel, 4-row playing field but this can expand into an impressive 5-reel, 7-row playing field. It also means the game can go from having 1,024 paylines to the staggering 16,807 paylines! As the game plays, the Bonus Symbols cause the playing field to expand with the Dwarf miner pulling the lever to expand the area.

Dwarf Mine is really something to behold, with an intense amount of details. There is a large collection of unique symbols as well as a wide variety of animations. The Dwarf is always on the screen, standing to the right and operating the reels. The expanding reels are personified by a special digging machine that bores down into the earth to add additional rows.

The sound is good but doesn’t fit completely with the theme of the slot. It has very bombastic music that would fit more with a fighting game than something that’s set under the ground. Nonetheless, it was of high quality and kept me engaged. The drilling machine used to expand the reels also has its own unique sound.

As you can tell, the coin value is pretty low, even for a five-of-a-kind win. The game lists itself as having a Medium Volatility but I found it to be rather difficult to get any big wins, especially because of the low coin value. The highest paying symbols, the gems, only appear on the extra reels, making it even more unlikely for them to pay out.

I did like the appearance of all the symbols, even though they are only lightly animated. The card suits were the most disappointing since they were barely made to fit the theme, instead appearing on cut out wooden boards.

Even though Dwarf Mine is very new it doesn’t have too many extravagant features. Most of them are pretty familiar:

The big draw for me was the expanding reels feature which triggered quite often, although it only rarely expanded all the way to its biggest size. It was possible for 1 Bonus Symbol to appear in the original spin, adding another row and exposing another Bonus Symbol, causing it to grow to its 6th row.

The gems were extremely rare and after about 30 minutes of playing, I had only accrued 2, even though there are 4 colours which all require 5 to get into the free spins mode. It seemed like it was unreasonable to expect that mode to trigger so to avoid disappointment I would suggest you don’t count on getting into it.

The Ways To Win feature did occasionally help in getting a win but due to a large number of different symbols, it proved difficult. The game says it has medium volatility but in my experience, it was still sparse with giving out wins and even when it did, they weren’t very big.

I thought the game had an interesting combination of features and especially the presentation of them was very appealing, but from a gameplay perspective, they did not work very well together. Wins were pretty rare even considering the ways to win and expanding reels, and the wins I did get were low.

Dwarf Mine is an ambitious attempt by Yggdrasil to combine graphics, animations and features into an exciting new slot. Although it definitely appeals to the visual side of me, I found the gameplay to be rather lacking.

The setting and appearance of the game reminded me a lot of Treasure Mine by Play ‘n GO, which in my mind did a better job at coupling it with attractive gameplay to create a slot that encouraged players to keep playing.

When you decide to try out this slot, keep in mind it’s possible to choose a bet between £0.10 and £125 per spin. I started off playing with rather high bets but quickly scaled it down as I noticed how difficult it was to get any sizable spins, plus I wanted to stretch my funds in an attempt to get into the free spins mode. The prospect of a max. win of 12,500x your bet was appealing but also felt very far away.

Not that Dwarf Mine isn’t fun to play, I just found some of the features to be underwhelming or simply impossible to get into unless I played for an excessive amount of time. I can’t imagine a lot of players would like to be forced to spend so long playing to get a chance of some of the most interesting features!

Play Dwarf Mine for free

Browse casinos with Dwarf Mine and other slots from Yggdrasil. Create an account and try the game for free before making a deposit.

You can play Dwarf Mine in English, Finnish, Swedish, German and 19 other languages. 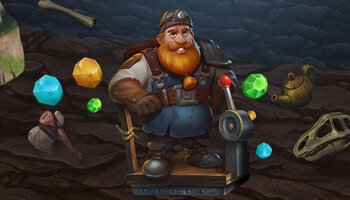