Dwarfs Gone Wild has a provocative title but it follows a family of dwarves as they delve deep under the earth in search of untold riches. Players can help these characters as they use free spins, random wilds and other features!

Originally released in 2018 by developer Quickspin, Dwarfs Gone Wild is a beautiful stylized slot that borrows elements from different fairytales to fill the game. The original high-paying symbols show fun, creative characters that also move about in the game when the right features are triggered.

The game has a 5-reel, 3-row playing field with a modest 20 betlines. The symbols that are part of a win light up with stars or gold coins framing the tiles, making it obvious what lines make up the win. There aren’t a lot of animations unfortunately, even the characters don’t move but it only slightly zooms in when they pay out.

In terms of theme, I found the game to be a bit confusing. There is one character that’s clearly based on Snow White, even holding a red apple. But the other characters aren’t all part of the seven dwarves, including a Strongman dwarf and a wizard. It seems like the creators simply took a lot of creative freedom when developing the game, but that’s fine too.

The symbols in the slot are all originally drawn, but unfortunately not all of them are actually original. The low-paying symbols are rudimentary card letters, with some ornaments in the background of the tile. They don’t look bad but as always I wished they had spent some more time coming up with original ideas to fill the reels.

The large number of different symbols makes it harder to get a win, which is balanced out somewhat by the very solid free spins mode as well as the occasional wins during the base game. This results in the slot having Medium Volatility which I found to be fairly accurate. There can be quite some time between wins though, so keep that in mind when you pick a bet between £0.20 and £100 per spin.

Dwarfs Gone Wild has a few normal features and a bigger number of special features during the free spins mode that I’ll go over in more detail down below. To begin with the normal features:

The Wilds were the most common during the base game, with the re-spins and free spins both triggering about as often. Which was a little odd, considering the free spins mode was miles better than the re-spins. I found the re-spins to be rather lacking, although it did have a nice animation where the Mirror on the Wall plays a big part.

During the base game, wins award coins that are used to fill a meter on the side of the screen. The meter begins the game half-filled and whenever it is full, a mining cart next to it lights up. Each mining cart is a special feature that is activated during the free spins mode. The more mining carts are lit up, the more special features are activated. There are a total of 7 special features:

The game starts you off with one mining cart so you’re always guaranteed at least 1 special feature if you were to trigger the free spins mode immediately. In my experience, this was quite hard so I would often have 3 or more different features activated at the same time. Be prepared to play this slot for a longer amount of time to get the maximum effect out of the special features.

It does mean that the free spins mode becomes more and more lucrative the longer it takes to activate since the features that are unlocked can appear on every spin, apart from the extra free spins. Couple that with the Rolling Wilds feature which activates re-spins as long as the Wild is on the screen but the additional features can still activate during that time. This can result in huge wins that aren’t otherwise possible.

It’s an interesting mechanic I haven’t seen in slots before, where frequent Free Spins are nice but if there is a lot of time between Free Spins you will have activated additional bonus features. This balances out the possible size of the wins.

Dwarfs Gone Wild is a nice-looking and fun slot that has a great classic game experience as its base. If you stick around for long enough and you can’t get the Free Spins mode to trigger for a long amount of time, don’t worry! The extra bonus features you’ll activate are sure to help in getting some big wins that will balance things out.

I found the game to be enjoyable and interesting, making the free spins mode a focus in the game without actually showing up that often. The Magic Mirror re-spins were a nice addition but had such a limited impact on the game or my wins that I largely ignored them.

If you’re looking for a nice casual slot, Dwarfs Gone Wild will probably fit that bill. Do expect to play for a long time if you want to get the maximum out of the bonus features. The max. win of 2,535x your bet is enticing but not as big as some other slots offer.

Browse casinos with Dwarfs Gone Wild and other slots from Quickspin. Create an account and try the game for free before making a deposit.

You can play Dwarfs Gone Wild in English, Finnish, Swedish, German and 23 other languages. 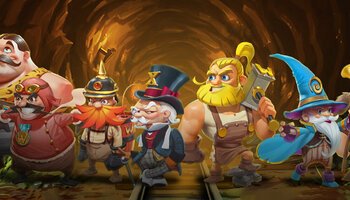