Dynamite Riches Megaways is the adapted version of the original slot that brings us deep under the ground where we are delving for valuables. The use of dynamite isn’t just to make that easier, it also helps uncover free spins, cascading reels and multiplier wilds.

The game was released in 2021 by Red Tiger, who have been hard at work creating new slots the last few years. Where they would often focus mostly on Oriental-themed games, nowadays they seem to be casting a wider net. In this case, the game brings us into an ore mine where the player is tasked with digging up gems on a 6-reel playing field with the Megaways feature.

Because of this feature, on each spin every reel will have a random number of rows between 2 and 7. This in turn causes the number of paylines each spin to vary wildly, from as little as 64 to as many as 117,649 paylines. If you’re at all familiar with the Megaways feature this likely won’t come as a surprise.

Everything in the game looks appropriate to the setting, with only the card suits as low-paying symbols feeling slightly out of place. The rest of the playing field as well as the background are all made to fit the theme. There are also some features integrated into the style of the game, like the Wilds as exploding sticks of dynamite.

Dynamite Riches Megaways doesn’t shy away from the idea of working in a mine as it makes sure players are constantly reminded of it. The high-paying symbols are all original art somehow related to the setting. Of course, with original I mean that while understanding it looks the same as those used in the first Dynamite Riches. Similarly, the low-paying symbols are card suits that don’t really fit the scene but are integrated well enough not to be distracting.

The game brings players a Medium Volatility slot which is a change from the deluge of high volatility games we’ve been saying lately. The lower volatility feels pretty apparent with more frequent wins and often slightly higher payouts. This also means that the opportunity of getting a big win is reduced. The game comes with an RTP of 95.71% which is actually quite low for a slot like this.

Players are free to pick a bet between £0.10 and £20 per spin. This might be a bit more limited than most other slots. In my opinion, it allows both normal players and high rollers to maximize their enjoyment without going overboard. When we look at the maximum win of 7,000x your bet it starts to make more sense they would limit the maximum bet as well. There aren’t many medium volatility slots that offer a jackpot as big as this.

Dynamite Riches Megaways incorporates a number of different features without feeling too complicated. The game actually limits a lot of the features behind the Wilds. Players need to have 15 Wilds on the screen to unlock a feature at a time. This rewards people who continue to play this game over a longer period of time.

The features in this game are:

The most important part of the game is the tracker at the top that is divided into 4 parts. Players will slowly unlock these 4 special features as they play. Whenever a Wild appears on the screen, the tracker is updated. Once a player collects 15 Wilds the first feature is unlocked. As the game progresses, the other features are unlocked as well.

Players are thus awarded for continuing to play this game, which is why it’s smart to adjust your bet so you can keep going for a long time. The features themselves can be more or less useful, with the random wilds and random symbols being the most beneficial. They are incidentally also the first 2 features to unlock.

Dynamite Riches Megaways is not a lot different from the original, so if you have played that before you will not be given something new to explore. The megaways feature does change up the feeling of the game but acts much the same. The high-quality graphics and entertaining features are still included.

I found the gameplay to be quite compelling although the unlocked features don’t activate often enough to feel like it’s worth it. After the first 2 features are enabled the need to keep going diminishes. Not that the last 2 features are bad, they just feel much more circumstantial. Coupled with the fact that they only activate very rarely, it doesn’t feel quite worth it.

Another downside is the difficulty with which to activate the free spins mode. I played for long enough to activate all 4 features but only hit the free spins twice. This also caused my funds to drop well below the starting point, unable to get it back up to where I started.

Browse casinos with Dynamite Riches Megaways and other slots from Red Tiger. Create an account and try the game for free before making a deposit.

You can play Dynamite Riches Megaways in English, Finnish, Swedish, German and 18 other languages. 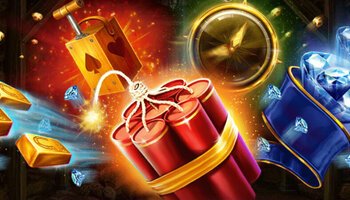