Easter Island is based around the famous statues placed there long ago, and it seems those statues have some things to show us!

Created by Yggdrasil, Easter Island was released in 2018. The game is set on the famous island in the Pacific Ocean where face statues were built that are largely buried in the ground. In the slot, they’re major characters that comment on your gameplay as well as influence the game in different ways!

Easter Island is a 5-reel, 3-row slot that can expand into a massive 5-reel, 7-row slot with up to 103 paylines. There are some other slots like this, including Testament by Play ‘n GO, NetEnt’s Aloha: Cluster Pays! and Valley of the Gods by Yggdrasil which have a unique take on this feature as well. The way it’s been presented is quite spectacular though.

The two statues on Easter Island have a lot of personality. They talked and commented while I was playing. They would also influence the game in different ways that I’ll talk about later. The location obviously plays a big part in the presentation of the game, showing us the island itself in the background with clear blue skies over it. As the reel grows, we get a better view of the largely empty island as well.

The graphics are quite amazing. The symbols are all hand-drawn and animated when part of a winning payline. The statues are the focal point of the slot as they constantly emote, talk, sing and participate in the game itself.

When it comes to the sound Easter Island uses a tropical sounding song to keep us in the mood. The statues have their own voices that they frequently use to comment on what’s happening.

The symbols in Easter Island are all drawn in a way to fit the theme of the game, but there are still card suits used for the low-paying symbols. The high-paying symbols represent different types of animals, presumably those that are part of the culture that originally paid the statues.

All the symbols look great with depth and a lot of detail to them. The reels they’re spinning on are made of wood which adds some additional sense of style.

Easter Island isn’t too complicated when it comes to the features it includes but they do help a lot in living up the gameplay.

It happened to me that I would get a four- or five-of-a-kind win, which meant there was a re-spin with the reels filled with the same winning symbol as the game expanded its reels. I will let you imagine how this increased the likelihood of getting some big wins.

That said, the game listed a Low Volatility. Although I did agree with the volatility, in this game it didn’t always mean the wins were small. They could be, of course, considering the low max. win amount, but there was such a high volume of them that I did quite well all things considering.

All in all, I enjoyed the features the game implemented, helped a lot by the two statues that gave commentary and cheered me on as I played. The features triggered enough for them to be relevant and they often helped in getting a win as well.

Easter Island is another slot on Yggdrasil’s docket that shows their skill in making beautiful, fun to play slots. The game leans heavily on its characters which I think they implemented well. Where other character-based slots can get annoying, Easter Island managed to find a good compromise.

By making the statues part of the game, I liked seeing them activate, knowing I was going to benefit from them somehow. The expanding reels especially were a nice idea, plus it was made an actual part of the game. Instead of having a static screen with a lot of empty space when the extra reels weren’t activated, the game zoomed out when the feature started.

Easter Island is an excellent game for players that like to have a modern slot without features that leave the base game. There are no bonus games here and the slot seamlessly transfers from 3 to 5 or even 7 reels and back. With some simple symbols above the reels, it’s also instantly clear what will happen once a feature is triggered.

The game offers players the opportunity to bet between £0.10 and £200 per spin. Even though it has Low Volatility, I’d caution against using bets that are too large although there is definitely a reward when you do with the prospect of a max. win of 2,060x your bet!

Browse casinos with Easter Island and other slots from Yggdrasil. Create an account and try the game for free before making a deposit.

You can play Easter Island in English, Finnish, Swedish, German and 18 other languages. 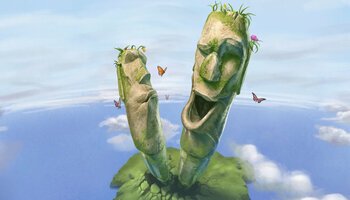