Eastern Emeralds from Quickspin - is this a real gem of a slot or a zither-fuelled nightmare? Let’s tweak our autoplay settings and explore the world of ancient China according to Quickspin.

Set among the karst mountain tops of a generic Chinese-looking location, Eastern Emeralds is yet another Asian-inspired title. The skyline, gently rendered in soft pink hues, is complemented by the twinkling of traditional string instruments. Okay, I’m feeling pretty zen already.

Our theme is solidified by subtle visual touches such as the flickering of lanterns swaying in the wind. The attention to light and shading in Eastern Emeralds is really impressive; this wouldn’t look too out of place in a landscape painting on a Chinese scroll.

A beguiling backdrop, that’s for sure. The grid, unfortunately, is a different story and there seems to be a stylistic conflict at play. While the background emanates an otherworldly serenity, peace and calm, the grid is a different kettle of koi.

The typography for the royals looks like it was taken from the sign of a nearby takeaway restaurant, while their colouring is super trashy; all brash, bold colours that create friction. Not only is there creative hostility between the backdrop and the grid, there’s also some in-grid fighting going on. These colours don’t work together at all and it’s doubtful that a clash aesthetic was what Quickspin was aiming for.

Eastern Emeralds gives us a manic, in-your-face grid with one hand and takes tranquillity and inner peace with the other. Hold up, where’s my zen at now? Features

A 5x3 grid with 20 paylines, Eastern Emerald’s offers up a 900x maximum win potential. Multipliers appear across all five reels, taking the reel number as inspiration for their value; reel 2 is home to the 2x multiplier, reel 3 the 3x, continuing to 6x.

Eastern Emeralds is looking good, mainly. But how do the in-game features measure up? A little on the feature-light side, Eastern Emeralds has the following gameplay elements:

Free Spin rounds are released when the reels are furnished with 3x phoenix symbols. The Free Spins round is played high among the clouds in a setting where you might expect the Monkey King to pop his head into the frame and ask for a banana. All crashing drum beats and dramatic audio effects, it's as exciting as Eastern Emeralds gets.

The Free Spins round begins with a ‘Choose your destiny’ option. Here, you have the choice of between 6 and 15 Free Spins. With a lower number of Free Spins, a higher multiplier is attached, while a larger amount Free Spins come with a lower multiplier. Your Free Spin options look like this:

Numbers have always held particular significance in China, but how do those of Eastern Emeralds hold up? Boasting an RTP of 96.58% with a maximum win possibility of 1,680x, Eastern Emeralds gives players the choice of a minimum and a maximum bet of £0.2 and £100 respectively.

A few years back I was working in a marketing department at an online casino that shall, for now, remain nameless. Eastern Emeralds was a game that we pushed aggressively, running countless promotions including ongoing Free Spin offers, deposit offers, leaderboards and prize draws.

Eastern Emeralds was touted as the next big slot and, to this day, still ranks pretty highly among other slot outings. Why is this? This is a standard slot, with standard features. I feel the online casino marketing machine seems like a reasonable culprit.

Slots that rank highly are placed at the top position in casino lobbies, while less popular titles are found only where intrepid scrollers dare to venture - towards the bottom. The popularity of video slots is locked in a state of self-perpetuation, and this needs to change.

Eastern Emeralds is easy on the eyes. It’s a good looking slot for sure, although the royals design feels like a misstep, bringing unwanted modernity and cheapness to the game. This seemingly minor slip screams inauthenticity to me. A calligraphic font would have fit perfectly and is also completely timeless; used from antiquity to this very day.

Lacking in both innovation and creativity, Eastern Emeralds is a safe choice for players. It’s going to scratch that itch if you’re looking for a run-of-the-mill Chinese-themed slot with some decent Free Spin action and average gameplay, but not much else.

Browse casinos with Eastern Emeralds and other slots from Quickspin. Create an account and try the game for free before making a deposit.

You can play Eastern Emeralds in English, Finnish, Swedish, German and 24 other languages. 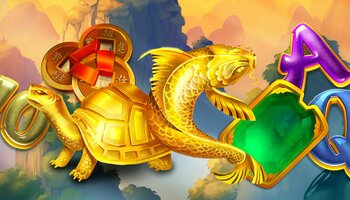