A group of drowsy-looking robot chickens are bored out of their wits on this five-reel, 20-payline EggOMatic slot by NetEnt. Yeah, the setting sounds completely bonkers but the gameplay isn't.

It all springs into action with the push of the Spin button, which prompts the EggOMatic machine to start delivering its golden eggs for the eventual payouts. I can't say that I was enamoured by the theme, but the gameplay, on the other hand, is quite unique.

Players will get a kick out of the extra features, especially the role of the wild in producing better wins with the help of the golden eggs. The maximum payout potential of EggOMatic is up to 94.750x your bet.

I made a start on the theme above, but I think it deserves a couple of additional notes. I ask why the chickens are not happy? Is it because they are robots? That may be the case after all, but it isn't the only striking detail about the game.

NetEnt has filled EggOMatic with moving parts and visual easter eggs. For example, the chickens sometimes crackle and other times they get electrocuted. The way in which they mark a payout is quite humorous, with bunches of golden eggs coming down from their nest on the reel-set.

Furthermore, the EggOMatic machine on the right is quite the contraption. Judging by all this, it looks like the premise is a mechanical chicken farm that has been equipped to deliver golden eggs, which is to say, cash prizes across the 20 fixed paylines.

I mentioned there is a wild symbol that can do some amazing tricks towards making better payouts, but it isn't the only feature in the game. The robot egg machine on the right can readily deliver a reel modifier, mystery eggs, as well as a free spins bonus.

EggOMatic can trigger more than one payline win across the 20 paylines. The symbols can be divided into two categories: low-paying baby chicks and high-paying chickens, ducks, sparrows and geese. I wouldn't laugh off the laughable concept, because some amazing payouts can emerge from any of these symbols.

The chick symbols come in five different colours. Combinations of three of a kind pay 0.25x for any of the symbols. Four and five symbol wins start to pay back the wager or bring in more, between 1x and 3.75x your bet.

Over to the other category, we have minimum payouts for three matching symbols that can bring between 0.5x and 1.5x. The most valuable symbol is a bionic chicken clad in a red suit. Five of these symbols pay 50x the total bet.

In terms of the bets, there is expectedly a wide range that starts at 20p per spin and ends with a maximum of £200.00 if the bet level is fired up at ten. The coin value, which is the amount of the payline bet, ranges between 1p and £1.00.

In consideration of the payouts, I can't say that I find the paytable overly generous. Three matching symbols pay more than the bet only with the fourth-strongest symbol, so most of the positive payouts depend on the reel modifiers and the Coin Win eggs.

The element of surprise comes with the free spins feature because the number of spins can bet anything between 7 and 50. I appreciate this kind of randomness, but only in this regard. Seven spins aren’t such a poor outcome either, while anything on the other half of the divide would be an added bonus.

My overall impression is that EggOMatic has engaging gameplay, but I did wish I had seen the spreading wilds appear more frequently than once in a very long while. That was my experience at least, I hope other players have a better fare with this game.

Browse casinos with EggOMatic and other slots from NetEnt. Create an account and try the game for free before making a deposit.

You can play EggOMatic in English, Finnish, Swedish, German and 20 other languages. 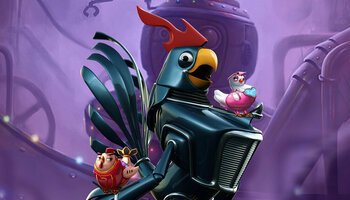