El Paso Gunfight xNudge brings the player back in time to the Wild West where towns were ruled by sheriffs trying to protect the villagers from rowdy criminals. This slot features stacked symbols, free spins and non-standard reels.

This game was developed by Nolimit City and released in 2021. Players can get an excellent sense of how the studio makes slots in this time period when playing this game. The first thing they’ll notice is the non-standard playing field. Reel 1 is only 2 rows, reels 2, 3 and 4 have 3 rows and finally reel 5 comes with 4 rows. This actually makes it harder to get a win, but there are 216 paylines during the base game to help out.

The setting is clearly based on the idea of the Wild West, with the game itself set in a bar. The symbols include various characters that only appear as stacked symbols. There aren’t a lot of animations in the game but there are some interesting things to change up the appearance. One of those is a series of old-looking photographs when a high-paying symbol is part of a win.

Obviously, the music also borrows from the Western setting but not as blatantly as you’d expect. Instead of the classic movie music you’d anticipate the game plays a song that sounds like something you’d hear in the bar. This fits the setting as the slot is set in a bar. Other sound effects include a firefight during the free spins mode, as well as other Western sounds.

El Paso Gunfight xNudge gives players a pretty immersive experience with a lot of details in both the symbols and outside of it. The high-paying symbols in this game are stacked symbols of different types of characters. If there are 3 of them on the screen they will nudge to fill the reels. When a win with these symbols is triggered the player gets to see photographs that show the aftermath of a shoot-out.

Meanwhile, the lower-paying symbols are card letters but these obviously fit the saloon setting somewhat. This is often where people would play poker and other card games. It’s actually quite interesting to see these card letters are not presented as shown on the cards. They come in a more modern font, which clashes a bit with the theme.

Players will have to deal with High Volatility when playing the game. In fact, the game offers the opportunity to even switch to extreme volatility. This will obviously make a win harder to get, but they will likely be bigger than normal. Players can deal with this somewhat by picking a bet between £0.25 and £50 per spin. Finally, there’s the prospect of a maximum win of 44,440x your bet. This is a lot bigger than most other slots offer.

El Paso Gunfight xNudge has a number of features that alter the base gameplay. They are:

The game did feel quite confusing while I was playing it. The difference between the high and extreme volatility was only clear when switching between them. There is also no indication of what the Sheriff and Deputy Badge mean or how they operate. This required me to look at the paytable to figure out, which I think most players will take the time for.

The rest of the slot plays quite easily. There are some interesting things that happen when players get a win with the high-paying symbols. All these symbols are stacked and nudged into place when there are enough on the screen to trigger a win. This means that the low payouts are somewhat balanced.

El Paso Gunfight xNudge is a fun slot with a strong grasp of the setting. The game feels like a Cowboy slot from the starting screen, making excellent use of the graphics, symbols and sounds you feel belong to the Western theme.

There are a lot of features included in the slot that augment the gameplay somewhat. It still plays like a regular slot, with the features all being activated automatically. This can sometimes feel a bit bewildering. There is only one choice the player has to make and that’s the choice between the high and extreme volatility.

It is always possible to swap between the two variations so players are encouraged to experiment. In my experience, the extreme volatility felt the same as the high volatility but with some more free spins triggers. These would also regularly facilitate bigger wins but I would still end up with fewer coins than I started.

Browse casinos with El Paso Gunfight and other slots from Nolimit City. Create an account and try the game for free before making a deposit.

You can play El Paso Gunfight in English, Finnish, Swedish, German and 12 other languages. 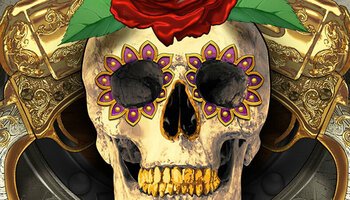