Players who like the esoteric end of things will enjoy the amazing Elements: The Awakening by NetEnt. The game was released in 2012 and raised the bar in terms of the visual quality of online slots.

Players can discover an amazing adventure on five reels and 20 paylines that can post cascading wins and a payout potential of up to 30,000x.

I find the game nothing short of amazing and this isn't only because of the visuals. Both the base game and the bonus feature are quite in line with the low to medium variance, making Elements a memorable game.

Both the theme and graphic design are unique and mimicked in releases by other companies. The setting is the aether, where the player spins the reels in order to materialize a number of elements and elemental entities that feed on their energy.

The elementals are alive and curious about the world about them and essentially represent water, earth, air and fire. Winning outcomes cause these symbols to vapourize, but they come back around alive and well with the coming cascade.

Elements: The Awakening doesn't differ substantially from other NetEnt games, in that it has few extra features that fit the gameplay perfectly.

Even though the capacity of each wild symbol is determined by the element, and these vary in terms of value, I find the Storm Wilds to be equally balanced. So an Air Storm Wild feature may not necessarily produce weaker outcomes compared to the Fire Storm Wild.

Bets can be set by selecting the Coin Value amount and the bet level. Coin values range between one penny and 50p. The amount is multiplied by the Bet level to provide the total bet per spin.

The Level setting has values between one and ten, which are multipliers on the bet amount. For example, setting the coin value to one penny to the fifth level results in a total bet of £1.00 per spin.

In terms of payouts, I find two completely different extremes on the paytable, and this is one of the details that I really like about Elements.

For example, the minor symbols can pay between 3x and 5x for three of a kind, however, getting five matching symbols to land on a payline results in prizes between 50x and 100x.

The high paying symbols can pay prizes that are significantly higher. Most lucrative prizes are made with five of a kind. The water element pays 300x, wind pays 500x, earth 750x and fire the game's highest prize of 1500x.

All winning outcomes are annotated in the bar at the bottom so that players can see the total win following the cascades.

Elements: The Awakening is one of the most fascinating games dating in 2012. I love the gameplay and the features, especially the fact that back then slots weren’t all high variance. So whoever is enthusiastic about a great slots experience and the possibility to win moderate prizes, relative to the bet, Elements is the game to play.

Play Elements: The Awakening for free

Browse casinos with Elements: The Awakening and other slots from NetEnt. Create an account and try the game for free before making a deposit.

You can play Elements: The Awakening in English, Finnish, Swedish, German and 20 other languages. 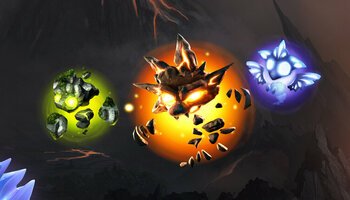