Elephant Treasure is a slot with Asian overtones but no specific theme, setting itself on the back of a giant golden elephant with random Wilds, coin wins, and a Free Spins mode.

The game has a 5-reel, 3-row playing field with a modest 20 bet lines, taking inspiration from Asian culture without any real direction. I was under the impression the elephant was mostly an element of Indian iconography but the game is also filled with frogs and other symbols that are more commonly seen in Chinese history. The game was developed by Red Tiger and released in 2017.

When it comes to its appearance, I thought the game really falls into the mediocre middle of the Red Tiger slots. The developer has a huge number of Asian-inspired slots that have become interchangeable in my head. With no discernable setting or style to set itself apart, it’s hard to give it any credit in its appearance. The high-paying symbols are good but even these are not all original, having seen them in some variation in other slots.

It also has a few annoying changes to what you’d normally expect from a game. There is a daily jackpot counter on the left side of the screen which shows the current size of the jackpot. This can be closed to only show the game but I noticed there is no place where you see your current funds! It was impossible to tell how much money I had spent. Besides that, there is also no way to turn off the music. Instead, I had to mute the tab if I wanted to play in silence.

Speaking of the music, the game has a very Chinese-sounding song playing in the background of the base game. When a special feature or Free Spins mode it starts to play something sounding a lot more Indian. It compounds the problem I have with the sound design, showing a lack of direction in what the game wants to convey.

The symbols in Elephant Treasure are a simple collection of golden items and animals for the high-paying symbols and card letters for the low-paying ones. The card letters are drawn in a style that resembles calligraphy but it’s used in many other Red Tiger slots.

The game has quite a number of symbols but the coin wins are rather high, especially for a full win line. With the addition of frequent wilds, including random wilds, the game lands on a Medium Volatility. Players also have the ability to bet between £0.10 and £100 per spin to increase or decrease their risk. Keep in mind that the game didn’t offer a clear overview of my funds while I played, which made it very hard to keep track of how well I was doing. Caution is advised!

Elephant Treasure has a couple of simple features that aren’t going to surprise many players, but I did like their implementation and they all showed up reasonably often. Especially the Free Spins mode was pretty common and triggered multiple times while I was playing.

The game also sometimes has the game remove any low-paying symbols from the reels, which I felt usually happened during the free spins mode. This obviously also helped in getting winning paylines.

The Wilds and Random Wilds were both very important in getting wins. Even though there aren’t that many different symbols in the game, the slot only has 20 bet lines and an average-sized playing field. The result is a game that depends heavily on its features to give you wins. Because they are so frequent, this averages out quite well.

I thought the Free Spins were a nice addition to the game, showing up frequently enough to count without being completely inconsequential. Every time it triggered I would walk away with a hefty coin win. As I mentioned before though, there was no way for me to see my total funds so I couldn’t say if I ended up with a net win or loss.

The activation of the special features, the coin win and the random wilds involved the background becoming animated. The giant golden elephant that is carrying the reels on its back is shown moving its bulk to shake the coins from the playing field, or it will aim its trunk upwards and blow random wilds onto the reels. I thought those were interesting little details.

Elephant Treasure is a very standard slot. It has good features, acceptable graphics and a nice play style. The problem is that it won’t stand out from the myriad of other slots, in general, and those made by Red Tiger. It simply has no elements that I would consider unique to the game, nor does it create any kind of memorable combination of features to create something interesting.

That’s not to say the game plays poorly. It’s a fine game for the average slot player that enjoys spinning the reels for a while, watching the different features trigger as well as winning now and then. The core gameplay is fine, it’s just that it disappears into mediocrity.

The progressive jackpot which rotates every 24 hours makes it an interesting choice, but it can also be played without one. This version only rewards a max. win of 888x your bet. That’s nothing to scoff at but also not the highest win there is to be found.

Browse casinos with Elephant Treasure and other slots from Red Tiger. Create an account and try the game for free before making a deposit.

You can play Elephant Treasure in English, Finnish, Swedish, German and 18 other languages. 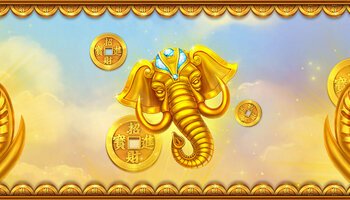