Elven Magic takes place in a beautifully-enchanted forest where an adventurous Elven archer protects its inhabitants and perhaps helps us find a mythical treasure!

Developed by Red Tiger and released in 2017, Elven Magic takes a page out of many fantasy books and uses the fantasy setting as its theme. The slot takes place in an enchanted forest, showcased by a wonderfully-detailed background. The 5-reel and 3-row playing field is framed by tree trunks that seem to have grown organically around them.

The graphics are beautiful and the different symbols are largely made to fit the theme. When the player hits any of the 20 paylines the game, unfortunately, doesn’t offer any special animations but simply highlights the symbols involved. Even though the symbols are all highly detailed, most of them are based on card suits which detract from the theme.

When it comes to the music we’re treated to a slow and soft mythical song that I found to be pretty standard. It sounds fine but adds nothing new to the experience either. Wins are announced with a short jingle that contrasts with the soft music.

Obviously the enchanted forest and mythical beings are a popular source of inspiration for many video slots. Other examples include Enchanted Crystals and Enchanted Meadow by Play ‘n GO, or Faerie Spells by Betsoft. It’s unfortunate I felt that Elven Magic didn’t really set itself apart too much from these other slots.

I thought the symbols are acceptable and look sharp and clear, but they’re not overly original. Luckily, the different features offer quite a lot of animations that liven up the reels instead.

Most of the gameplay in Elven Magic revolves around the Elf being an archer, which is confusing when you look at the title. Nonetheless, the different features help in creating a special experience in my eyes.

A large part of the game is based around the random arrows shot by the archer. During my time playing, I found no way to influence this at all. The archer simply shows up occasionally to shoot 1 of the 4 types of arrows onto the playing field. It can even happen she will shoot multiple arrows after each other.

Each type of arrow can be very beneficial or it can be completely inconsequential. I didn’t really find one to be better than the other, although they were all generally good for a win of some kind. You might get a guaranteed win every time the Archer shows up but I saw no mention of that.

The Bonus Game is harder to get into but also more fun. It requires 3 Bonus Symbols on the screen at the same time, which I only managed to do a few times. Once you trigger the Bonus Game, the playing field drops away and you’re presented with a target that’s very far away.

First, you get to pick a quiver that holds a number of arrows. This dictates the number of tries you get. Afterwards, you can help the archer make her shots. This is done by using a meter that fills up and empties out continuously. All you have to do is pick the moment when the archer releases her string and shoots. I found that firing at the point where the meter is completely filled doesn’t hit the centre but instead, you should release just before that.

You won’t get any actual coins from doing this but instead add up multipliers that are applied to your current bet amount. This can go up to a maximum win of 1,094x your bet! I thought this bonus game was pretty fun and very lucrative, even though I never hit the bulls-eye with the 500x multiplier.

Elven Magic doesn’t really do anything too special when it comes to its appearance or setting. It all looks fine and it plays well, but the game looks pretty standard when compared to other slots with the same setting.

The features do help set it apart. The different arrows show up frequently enough to be interesting and have a real impact on the gameplay. Meanwhile, the bonus game was pretty much every time a big boost to my funds.

During my time playing, I found the game’s High Volatility to work in my favour a lot. The wins were massive when playing the Bonus Game and the different arrows would also often create big wins. The downside is that the wins in-between are not that big and will drain your funds if you’re not careful.

Browse casinos with Elven Magic and other slots from Red Tiger. Create an account and try the game for free before making a deposit.

You can play Elven Magic in English, Finnish, Swedish, German and 18 other languages. 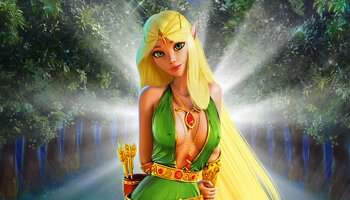