For the record, there are no emerald diamonds out in nature, but there are diamonds that are given the highly meticulous "emerald cut", which makes them even more expensive.

The game at hand can deal a hand of precious emerald rocks for a high-valued payout or the same symbol but in its wild guise for an even bigger payout and then some more.

When I heard about this game, at first I thought it is about leprechauns and the luck of the Irish, but I was wrong by a wide margin. Emerald Diamond is nothing but a simple three-reel, one payline slot that was released by Red Tiger Gaming in 2018.

I had let myself play a number of rounds on it because it comes with a decent maximum payout of 1,500x your bet and because, unlike slots with multiple paylines, with single payline slots you simply know when the big win has cropped up because it comes at once. All it takes is three matching symbols on that single payline for a big win to occur, and there are few possible outcomes of such stature.

Fun fact: only 3% of the world's diamonds are cut in the Emerald style, so I can be certain in saying that Red Tiger Gaming had named their game with keywords such as 'rarity' and 'uniqueness' in mind.

And I do find Emerald Diamond unique because it is a retro slot that includes typical fruit and classical slot machine symbols, but has a look and feel that are somehow Irish. This may be due to the clover-green finish of the unit or it could simply be the wild symbol that can pass for a symbol in any slot that involves pints, harps, clovers and leprechauns.

Also, for a simple one-payline game, Emerald Diamond has quite an energetic gameplay. This is mainly due to the frequent buzzing, shaking and flashing visual effects that surround each reel individually, as well as the reel set as a whole.

The electronic sound theme that comes with hints of fanfare gives Emerald Diamond a contemporary character. I enjoyed playing with the sound on, even though the same track is on loop at all times, plus the additional exclamations and sound effects.

Emerald Diamond comes with eight symbols, but there are 10 winning outcome possibilities, plus several more whenever one or two wilds are involved. This is a game that any player can play and not make their selection a mistake just because all winning outcomes are 1x your bet or higher.

I really like that a single cherry symbol can pay back your bet. I've seen plenty of classical slots that can pay with two symbols, but very few games can do that for one of a kind that can land anywhere on the reels.

The burning seven symbol pays 80x and any kind of a diamond symbol showing in three positions on the payline pays 800x.

I just want to repeat the fact that any of the outcomes on the paytable are doubled when a wild symbol has been part of the payline. Basically, this is what makes Emerald Diamond a choice that may be worth it.

Emerald Diamond is adamantine in any respect - graphics, potential payouts and gameplay. This is rare for a one-payline game and I am happy to say, Red Tiger Gaming has done it right. The game has high variance and RTP of 96.08% that I find suitable for the game at hand, but keep in mind that one-payline slots have a lower hit rate.

Players can try Emerald Diamond with as little as 20p but I think that this is a game that you can play with a higher amount because that can reflect substantially in case of any of the higher payouts or a medium payout with the wild on the payline.

Browse casinos with Emerald Diamond and other slots from Red Tiger. Create an account and try the game for free before making a deposit.

You can play Emerald Diamond in English, Finnish, Swedish, German and 18 other languages. 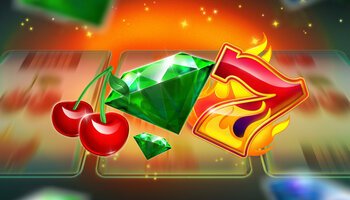