Welcome to the Emerald Kingdom where chance plays a big part. This is a volatile and chaotic slot full of wild features.

In the autumn of 2020, Pragmatic Play released a slot by Reel Kingdom called Emerald King. This is a surprising slot, as it has a ton of different special features and a great deal of randomness in it. Sure, all slots are random, but this goes the extra mile.

I can easily see how the developer has had a bunch of great features in mind, which obviously are the best part of the slot. Unfortunately, they didn’t really know how to implement them properly. The game has a chaotic feel where everything just happens, not for a reason, but because of chance.

If you have played Reel Kingdom’s slots before, then you are in for some good news. The developer has clearly improved and Emerald King is already a perfectly playable slot. The same couldn’t really be said about their previous games.

Emerald King bears the tell-tale external features of a Reel Kingdom slot. It’s colourful, the symbols are large and are based on classic fruit machines. This game has a theme, even if it is a bit thin.

The game is loosely based on Irish legends and mainly just borrows the colour-scheme and few iconic images, like a four-leaf clover and a pot of gold. These aspects are not really utilised in the game, but at least it’s something.

This slot will not win anyone’s heart over just by looks alone, but at least it’s not actively bad. This is a step in the right direction for Reel Kingdom, whose previous games have been much worse. They are now in the perfectly adequate category and hopefully are on their way up.

The same can be said about the audio. The slot is trying to be a classic fruit machine, so there isn’t that much going on. There is some music, but it is easily drowned by the jingles and fanfares. Especially if you are playing with turbo mode, then the sound of the reels covers everything.

The symbols of Emerald King have a bit of a mixed feel to them. You don’t usually get card number, fruit and picture symbols in the same game. What makes it stranger, is that the fruit are worth the least, then the card numbers and on the top is the Emerald King himself.

To mix things up a little more, all of the symbols can appear as colossal symbols. 2x2 and 3x3 symbols act as though they were a cluster of four or nine regular ones.

If you look at the paytable, you notice that the symbols are not worth much. Only the two best ones are actually good and the rest feel like filler. The reason for this is that the game has a lot of different special features and multipliers that can surprise you with longer combinations and thus, bigger wins.

The slot has high volatility and it is pretty clear when you start to play. Most of the features are completely random and will activate whenever they feel like. You can get more wilds, activate the bonus game or increase your multiplier, all with a no rhyme or reason.

Emerald King has a strange payout cap for each spin. No matter what happens, you can only win 20,000x your bet on any single spin. I doubt most of us will ever need to worry about this, but it was something worth noting.

Nothing is worse in a slot than a losing streak. Emerald King tries to alleviate this by giving you a growing multiplier. Every time you lose, there is a chance that the Win Multiplier will increase by one. Then when you win, it will reset.

Changing your bet will automatically reset the multiplier. The game will warn you of this the first time you change your wager.

Four-leaf clovers are often seen in slots, but not exactly this way. At the start of any spin, the clover can fly over the reels and turn some symbols to wilds. This is a completely random feature.

The game has a green colour-scheme to it, but some reels are turning completely green. If all the reels turn green at the same time, then you have just activated the Mini Slots feature and will be taken to the bonus game.

A random amount of small slot machines will appear on the screen. Some can even be 2x2 or 3x3 and have an extra multiplier on them. If a slot machine wins, then it will spin again and again until there are no more wins.

Emerald King is a wonderful step forward for Reel Kingdom. This is actually a game that someone might want to play. Sure, I can’t say I like every choice made in the development, but at least this game is playable.

One word comes up over and over when I talk about this slot and that is ‘random’. Everything in this slot happens for a random reason and at random intervals. In my books, that is bad design. A special feature needs to be a kind of reward for doing something right. Even though every slot is random, there has to be a cause and effect.

In the end, that randomness was the biggest reason why I didn’t enjoy this game. It felt chaotic and I didn’t enjoy that part of the slot. It is great to see improvement from Reel Kingdom, but there are still some basics left to learn.

Browse casinos with Emerald King™ and other slots from Pragmatic Play. Create an account and try the game for free before making a deposit.

You can play Emerald King™ in English, Finnish, Swedish, German and 20 other languages. 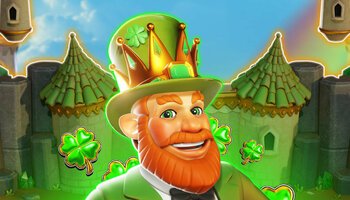