Emoji Planet has been removed from NetEnt's game library in February 2021.

What would we do without emojis? Explaining things takes an awful lot of time, and no one has it. So it is smiles away on the Emoji Planet slot by NetEnt, which makes cluster payouts by grouping together some of the most widely used emojis in the world.

The game can provide dynamic adventure with the help of the cascading wins system, a set of reel modifiers, one fabulous tune and a payout potential of up to 10,000x which is based on winning a cluster of 30 matching symbols.

The reel-set is a grid of five horizontal and six vertical rows which encase eight different kinds of emojis and a wild symbol.

NetEnt must be congratulated for not squandering the chance to make most of the emojis theme. To ensure that this game rocks, the developers had thrown on lots of moving parts. Random characters from NetEnt’s slots pop in and out of the screen, the avalanche/cascading wins keep the game edgy and the symbols crackle and pop.

Some players may recognise Gonzo, the adventurer from Gonzo's Quest, as he frequently comes on to peer what’s happening in the game. That's just NetEnt having silly fun.

I guess all of this is to say that I like the game and I think many players still do, even though it was released in 2017 and there are dozens of decent cluster-pays games.

Emoji Planet makes the payouts by using the cascading/avalanche wins system, which allows room for more than one reel-modifier. A total of five Emoji Features correspond to the five symbols on the paytable which comprise the low and medium payouts.

Emoji Planet makes payouts for clusters of five matching symbols that can post on horizontal or vertical rows, which can include symbols that are adjacent.

As for the payouts, there is a typical schedule that shows the amounts for wins starting at five of a kind and up to 30.

Low-paying symbols are the two hearts, the bomb, the pizza, lips and rocket. A cluster of five symbols pay 5x for the first two and 10x for the remaining symbols.

The high-paying symbols are the smiling doodoo, the alien and the laughing emoji. These pay 20x, 30x and 40x in that order for five of the same kind.

Any of these figures can get wrapped inside a bigger payout because the game can create multiple cascades resulting from the same spin. Trying to keep track of the winning outcomes for each cascade is not an easy task, as there can be a lot going on. Thankfully, the payouts are stated at the bottom of the screen, and multiple cascades with big wins are made known across the entire reel-set.

There are plenty of games similar to Emoji Planet that were released in the past two years, but few have become as memorable. This gives me the right to consider Emoji Planet a classic.

No surprise, the cluster wins on their own don’t really amount to much that’s worth counting, however, the cascades can certainly improve the outcomes. More cascades from the same spin means better odds at triggering any one of the reel modifiers, or two or more in succession.

Emoji Planet is a low to medium variance game with a theoretical RTP of 96.48%, so it is very likely that you aren't going to see a lot of the laughing and alien emoticons. On the other hand, all is possible with the help of the cascade wins.

Browse casinos with Emoji Planet and other slots from NetEnt. Create an account and try the game for free before making a deposit.

You can play Emoji Planet in English, Finnish, Swedish, German and 20 other languages. 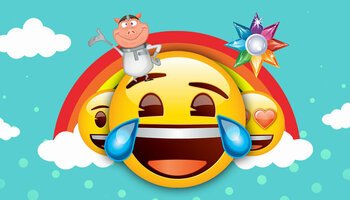