Emperor’s Tomb is set in the heartland of China where an enormous temple is built to serve as the emperor’s resting place while a bonus game and free spins are hidden behind the doors.

The game was released in 2017 by developer Evoplay Entertainment, creating another slot set in Asia amongst other titles such as The Legend of Shaolin and Red Cliff. That’s not to say it isn’t an attractive slot with good core gameplay, it’s just noticeable that this developer uses Asia as a source of inspiration frequently.

Emperor’s Tomb comes with a 5-reel, 3-row playing field and a total of 9 paylines which makes it rather small in comparison to other games. Still, it lists itself as having a Low Volatility since the bonus game and free spins mode trigger a lot.

The slot is set in a Chinese valley flanked by mountains with in the middle of the screen a giant temple, which we can presume is a tomb. The playing field is projected onto it, filled with symbols that relate to China in some way. Unfortunately, the low-paying symbols are simple card letters which ruin the atmosphere quite a bit.

The music plays quietly in the background with only vague oriental-sounding music. Most of it is based on slow-beating drums with some flute solos thrown in for good measure. I liked how it sounded and it was something different from the classic Chinese music that other slots use. Getting a win played a soft flute sound as well, no electronic jingle that takes us out of the setting.

There are a fair number of symbols in Emperor’s Tomb, most of which are simple card-based letters that I felt didn’t fit the theme. The symbols are animated when they’re part of a win even though it’s mostly just flashing to show the payline and the total coin win showing in the middle of the screen.

I found the graphics to be nice and colourful although the low-paying symbols blend together since they’re all simply bright red with yellow letters. Meanwhile, the original symbols are beautifully drawn and actually relate to Chinese culture. Players can pick a bet between £0.10 and £500 per spin but the total amount won is shown as coins and not in Pounds.

Emperor’s Tomb doesn’t have a lot of features but they did appear quite often, especially the bonus game. The different features are:

The Bonus Game and Free Spins mode activated quite a lot during my time playing and would each show up about as much. Meanwhile, the base game had very little going on with only the occasional Wild appearing on the screen. Wilds would only be able to show up on reels 1, 3 and 5. Very rarely there would be more than 1 Wild on the screen at the same time.

The Free Spins mode was a rather dull affair as there were no special features that activated during this part except for the multiplier. The Wilds showed up as frequently as they did in the base game, meaning there were no special additions that made a win more likely. The multiplier did increase the size of any wins but the end result would still be quite disappointing.

Since the Free Spins mode triggered quite frequently this was largely compensated though, as even a few small free wins are often better than a single big win after many costly spins.

The Bonus Game takes us into the Tomb and presents us with a nice view of what looks to be the treasure chamber and five bright red doors. Players can choose 2 of these doors, each of them either hiding a different coin win or the Collect prompt. If the player picks Collect, the bonus game immediately ends and the total coin win is awarded.

If the player picks a coin win twice, the 5 doors disappear and are replaced with 3 different doors. Again, the players get to make their choice. Pick coin wins another 2 times and the bonus game ends regardless, awarding the total coin win immediately. Choosing Collect at any time also triggers the end of this special mode.

During my time playing, I got quite good at picking at least 2 coin wins, resulting in wins between 80 and 160 coins on average. Of course, other people might get different results. Either way, it was a good way to boost my funds quickly and without any special requirements.

Evoplay has in my opinion shown themselves to be quite capable of creating attractive slots that incorporate nice-looking graphics into their games. The problem remains that the gameplay stays rather bland and unfocused. This is good news for people that like to play slots that require very little input from players as they can just focus on spinning the reels and observing the results.

I think a lot of players will probably enjoy the game at the start but get increasingly disinterested in the gameplay as it is very simple. That is balanced by the fact that the free spins and bonus game appear very often, making it more likely for the player to get coin wins without it costing any additional spins. I found that to be the biggest draw of the game.

Browse casinos with Emperor’s Tomb and other slots from Evoplay Entertainment. Create an account and try the game for free before making a deposit.

You can play Emperor’s Tomb in English, Chinese 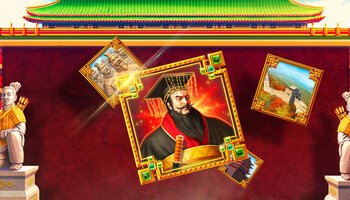