Will you be choosing a life of crime for a chance to Empty The Bank and live off your riches? Then get ready for the burglary of the century with this 5-reel, 4-column slot with 20 paylines developed by Pragmatic Play and released in time for the summer of 2021.

This game feels and plays like many of the Pragmatic Play games. The design is kind of cheeky and despite being set in the darkest of nights, the slot is vibrant and colourful. This game also comes with an ante feature where you can increase your bet by 0.25x to increase the chance to enter the bonus round. It also has the possibility to buy into the bonus round directly.

During the base game, you might see the thief run through the reels. When this happens, the next spin will mostly feature high-paying values and wilds.

Hitting 3 scatter symbols will trigger the Empty the Bank respin feature. Here, the base game reels are replaced with a 4x5 grid (which has a chance to increase in size to 6x7). During this feature, only special symbols will be shown on the grid.

At the start of the respin feature, 3 money symbols with a random value will be placed on the grid. Symbols can only land on open positions within the grid. You start with 3 respins but these are present whenever a symbol lands on an open position. The round ends either when the respins end or the grid is full of special symbols.

The special symbols are:

This game gives the player the possibility to increase the bet by 0.25x for the game to produce more bonus symbols for a chance to enter the Empty the Bank respin feature naturally.

For those of us who have little patience, there is a chance to buy straight into the bonus feature. This costs 80x your bet. However, this feature might not be available in some countries.

At first glance, Empty the Bank feels like a Pragmatic Play slot. But enter the bonus round and you find quite an interesting and original mechanic at play. Of course, you will find the signature high variance at play here and there is an RTP of 96.48% on the table. Note that this RTP is slightly reduced to 96.44% when buying in the bonus round.

So this game will feel brutal at times, and rather than emptying the bank, you may see your balance being emptied. However, with such risk, there is also a 10,000x max win reward. This can happen in both the base game and the bonus game. If 3 chests are found in the Empty the Bank respin feature the 10,000x reward is given out and all other features are forfeited.

The bonus itself is very similar to Relax Gaming’s Money Train 2 but it does put a few other things in the mix. The bonus is also highly volatile and when I paid into it I only managed to get my money back 4 times out of the 12. To be fair, on one occasion I won a neat 444x (so the 80x buy-in was well worth it).

Entering the bonus game from the base game can be a little tricky but it isn’t too rare. When I did, I was rewarded with a 230x win. So this game does come with very high volatility and I would advise novice players to get a feel for it by demoing it. Experienced players will no doubt love the rise of BPMs the bonus round will bring with it.

Play Empty the Bank™ for free

Browse casinos with Empty the Bank™ and other slots from Pragmatic Play. Create an account and try the game for free before making a deposit.

You can play Empty the Bank™ in English, Finnish, Swedish, German and 20 other languages. 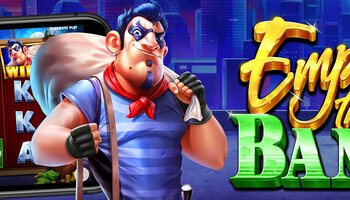