Enchanted Crystals shrinks us down to fairy size and has us explore their tiny world. I’m confident there’s going to be some big surprises to be found.

Originally released in 2014 by developer Play ‘n GO, Enchanted Crystals places us in the magical and whimsical world of fairies. Surrounded by tall grass, enormous flowers and even a hostile goblin king we try to find some riches.

The slot is built around a 5-reel, 3-row playing field with 243 Ways To Win. The game is populated by a selection of colourful fairies while we can see a strange altar in the background, surrounded by an enormous garden of some kind.

Enchanted Crystals looks to be a successor to 2012’s Enchanted Meadow although there are only a few connections between the two games. Still, they both have the same vibe and combine great graphics with a lighthearted style. If you’re in the mood for another fairy game, I would also suggest Betsoft’s Faerie Spells. Another slot that combines magical graphics with a solid game experience.

Even though the game is getting a little older, the graphics still hold up well. There is a lot of colour and movement, making it a joy to watch. When you get any of the fairies on a winning payline it shows you a quick pop-up image, while the other symbols have small animations.

The music is what you’d expect. High-tone triangle and bell sounds create a sense of living in a magical garden as tiny beings flutter around. The activation of the bonus game with the Goblin King prompts more adventurous music which fades after the extra game is completed.

Enchanted Crystals has a smaller selection of symbols. They’re divided into the high-paying fairies and the lower-paying card symbols. I preferred the fairies obviously since they’re uniquely drawn and come with their own personality. The card symbols are the traditional Ace, Queen and so on. They are drawn in a style to fit the slot but I always wonder if they couldn’t have come up with 5 more unique symbols.

The symbols aren’t overly animated but there’s enough movement in all of them to make the slot come alive. It helped in making the fairies seem active and enhanced the feeling that I was shrunk down and sitting among them in the garden.

Enchanted Crystals has several bigger features that I thought were very interesting. Overall both the bonus game and the free spins mode activated quite regularly. The slot has High Volatility and that fit my experience pretty well. Especially when getting Sticky Wilds this could ramp up quickly in becoming quite a big win but I’ll talk about that in a bit.

I thought this was done well, with every level having its own appearance. If you make the right choices you can run off with the treasure. Otherwise, you get to keep what you collect.

The free spins mode was a simple affair. The big change with the base game is that it includes normal wilds. Each spin, up to 5 wilds can appear. These also have the biggest payout if they show up on consecutive reels.

The free spins mode was quite simple in my opinion. It doesn’t change the appearance of the reels. The added wilds were nice but didn’t really pay off while I played. Obviously that can be different for every player. The possibility to get up to 50 free spins by collecting more free spins symbols is a nice addition.

Even though Enchanted Crystals is getting a little older, it still looks and plays great. It has a nice number of features without becoming overbearing. The bonus game was a personal highlight for me since it really takes us out of the standard playing field and adding a new layer to the slot.

The different features added some colour to the game. The stacked sticky wilds with re-spins paid off very well a few times, but they don’t show up very often. The game’s High Volatility did show at times, but I think wins were frequent enough to keep me interested.

Browse casinos with Enchanted Crystals and other slots from Play'n GO. Create an account and try the game for free before making a deposit.

You can play Enchanted Crystals in English, Finnish, Swedish, German and 30 other languages. 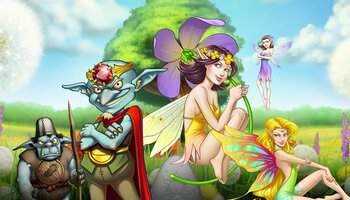