Epic Journey is based on the classic tale of the Monkey King as he travels the hills and plains of China, exploring the land and looking for treasure.

There are quite a few slots based on Chinese culture and the Monkey King might be one of the most famous tales. Still, I think developer Red Tiger did a good job at creating something original when they released this slot in 2016. The background shows a lush countryside while the high-paying symbols consist of different characters that look fantastical and realistic at the same time.

There is a lot of detail put into this slot with a great deal of attention going into the graphics. The game is soaked in a yellow tinge which gives it an immediate mood. The background shows a hilly landscape soaked in the early morning sun. When we play the Epic Journey bonus game we are given a better look of the area, as well as exploring the mythical islands floating high in the sky.

It all looked very nice and the 5-reel, 3-row playing field sometimes showed Stacked Wilds that were specifically designed to fill an entire reel with the special character. I did think the low-paying symbols are simply ugly which diminished the effect a lot. When one of the 20 betlines was triggered, it did not start any animations. Instead, the involved tiles would light up slightly.

The music has a distinctly oriental sound with gongs and harps, while the winning jingles are rather Western sounding. It created somewhat of a contrast which isn’t necessarily bad since it adds some originality to a rather played-out style.

The symbols in Epic Journey aren’t especially original but they mostly do look good. There are 4 different characters that all act as Wilds and only appear as Stacked Wilds. The other high-paying symbols are different objects related to the tale. The rest of the game is filled with low-paying symbols that are simple cards.

Because of the large number of low-paying symbols, it’s quite difficult to get a big win, but the special features help keep the game on a Medium Volatility. I found the bonus games to trigger relatively often and there were multiple different features that could activate at random and help in getting a win.

Where a lot of slots made by Red Tiger are light on features, it seemed that they put every idea they had into Epic Journey. Not only does it have about 4 features that can activate randomly during the base game there are 2 different bonus games to activate!

The Stacked Wilds appeared quite frequently during my time playing which was definitely welcome as it was rather difficult to get wins without them. The Wilds were made to be Stacked, meaning they had special art of the characters that was 3 tiles high.

The Colossal Symbols were extremely rare and I only saw it once or twice during my time playing. I can understand they were rare because they did guarantee a big win but they appeared so rarely they barely felt like part of the game. Similarly, the Nudge feature seemingly triggered extremely rarely and when it did, it would not indicate it at all. If I wasn’t paying attention I wouldn’t have noticed.

Finally, the Magic Reels were again very rare. It also has to do with the way these special features are presented: the playing field turns red and a staff twirls past the screen. Afterward, the special feature is applied. There is no text mentioning which feature triggered or which symbols were changed.

Strangely, the 2 bonus games activate a lot more often than the special features and it’s a good thing they do since they are easily the best part of the game. The Epic Journey gives us a grand view of the landscape with a winding road leading up to the mountains. The player picks one of 6 chests which holds a number of steps as well as the possibility for another pick.

As the player travels up the winding road they collect multipliers. If they managed to make their way to the top of the mountain they’re transported to a series of floating islands with different big multipliers including the maximum 888x your bet. I found that any time the bonus game triggered I would walk away with a good number of coins, even if I didn’t reach the jackpot.

I thought the bonus games were the best part of the game, with a familiar mechanic but being different enough from each other and the base game to offer some much-needed variety. The different special features didn’t really show up enough to feel like an integral part of the game but they still helped in getting wins.

Epic Journey is a nice example of what Red Tiger is capable of when they put their minds to it. The game has a lot of personality even though it doesn’t specifically focus on any one character. Instead, it sets the mood very well and amplifies the experience with the different features.

Players that enjoy a classic slot with some new features and random surprise mechanics will like Epic Journey as it goes out of its way to introduce these. The main downside to me was that they didn’t show up very often. With the ability to choose a bet between £0.10 and £100 per spin you can decide the amount you’re most comfortable with.

Browse casinos with Epic Journey and other slots from Red Tiger. Create an account and try the game for free before making a deposit.

You can play Epic Journey in English, Finnish, Swedish, German and 18 other languages. 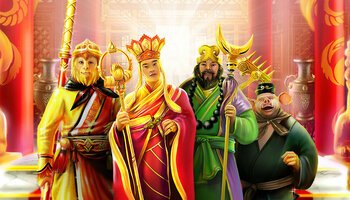