Esqueleto Explosivo 2 is the tongue-twisting sequel to the original with the same name, bringing back the series of animated skulls as they play their instruments and explode in a flurry when part of a win. The game further features free spins, multipliers and cascading reels.

The game looks great once again, which is no surprise when we consider that the developer Thunderkick has a tendency of creating good-looking games. The sequel was also brought out in 2021, making it one of their latest releases. The slot combines a rather cartoony look with a lot of 3D graphics, which makes it look vibrant while also being more easily animated. The 5-reel, 3-row playing field ends up feeling very alive.

There are 99 paylines in total, making wins possible whenever a symbol appears on consecutive reels from left to right and it touches the other symbols horizontally or diagonally. Whenever there’s a win the skulls involved will open their jaws before exploding in apparent confetti. This looks a lot less horrifying than it sounds. The background of the game emphasises the Mexican setting, showing a Latin-American house with a lot of candles and other related items.

As with the original game, music plays a big role here. There isn’t music playing all the time but instead, it is triggered at appropriate times. A fun detail is the skulls singing whenever they’re a part of a win, although it wasn’t in a language I could understand. The other sound effects enhance the setting, like the skulls exploding or the skulls dropping down on the reels.

Esqueleto Explosivo 2 only uses a variety of skulls to fill the reels. These all look alike and are most easily distinguished by looking at their colouring. Players that pay a bit more attention will see that there are also subtle differences in the size and shape of the skulls. Either way, it was easy to tell them apart and that made it simple to see any paylines. The game also highlights the winning symbols by having them sing and a line disguised as sheet music shows the winning bet line.

The symbols in the game are from highest to lowest:

Since the game relies heavily on the cascading reels mechanic it has High Volatility. Players can play into this or try to diminish its effect by picking a bet between £0.10 and £100. The game also offers a maximum bet of 5,000x your bet, which is about average for a slot with this volatility. I thought the game was pretty good at keeping things steady and I ended up with a tidy profit at the end of my gameplay.

Esqueleto Explosivo 2 brings a number of features to the fold, most of which are taken from the original game. Players that have played the first game should have no problem getting started with this one. New players will likely also be able to get started quickly though. I did not find the features to be very complicated even though they add to the gameplay in different ways.

The game takes place mostly on the main screen since activating the free spins mode proves difficult. Even with only 2 Bonus Symbols required to do this, I would only activate the free spins mode maybe twice during my time playing. Fortunately, I found the base game to be appropriately entertaining anyway.

Although the game has high volatility, the slot does grant wins rather frequently. This is because the standard payouts are low and the game relies heavily on the cascading reels mechanic. Every time there is a win the multiplier will increase, which means that getting wins over time is essential to get payouts that are big enough to pay back the spins.

Overall, I found that the features do add a lot to the gameplay. The free spins mode is mostly the same as the base game, only with higher multipliers. Getting this mode to trigger is therefore good for your funds but it’s not necessarily mandatory to keep your funds steady.

Esqueleto Explosivo 2 is a fun slot that looks incredible. I don’t know if it really offers enough change from the original to justify itself but I would say that any updated version of the original game is already a good reason. The attention to detail, both for the graphics and the sound, is once again excellent and players can get a lot out of this slot just by watching it spin.

The features are well thought out and work together to create interesting wins. There is a heavy emphasis on the cascading reels mechanic so players who don’t enjoy this should keep it in mind. The combination of cascading reels and multipliers explains the high volatility.

If you’re interested in a beautiful looking slot or you simply want to enjoy a creative and fun slot, I would recommend this game. It has a lot to offer and will likely please a lot of people.

Browse casinos with Esqueleto Explosivo 2 and other slots from Thunderkick. Create an account and try the game for free before making a deposit.

You can play Esqueleto Explosivo 2 in English, Finnish, Swedish, Norwegian 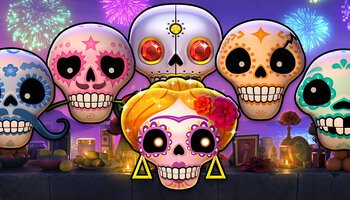