Get ready for some fireworks in Esqueleto Explosivo. One part cute, one part creepy and 100% enjoyable, this 5-reel, 3-row slot with 17 paylines will put a smile on anyone’s face. This is one of the most fun slots I’ve set my eyes on. Kudos to Thunderkick for going all out on this Day of the Dead theme and delivering something so flamboyant.

Set in a dimly lit alley a group of boney mariachis want to make some sweet, sweet music. There are mucho multipliers to be had and they will sing whenever a winning combination happens. After their song is done they will also explode, making room for more skulls to join in the chorus.

The symbols are all represented by differently coloured skulls. There are only 5 symbols in play together with an Explosivo wild symbol.

The Wild is a golden skull and can substitute for all other symbols. When in play, whether it’s part of a payline or not it will explode and take with it the closest surrounding symbols increasing the multiplier by 1 level.

When a combination happens the skulls will explode in a cloud of confetti making way for more cascading skulls. Every time this happens, the multiplier goes up by one stage until there are no more combinations or it reaches x32.

OK so this is a super-simple slot but you know what I had an amazing time playing it. There is something so festive about it that it immediately put me in a good mood. The colours, the way the skulls explode, the catchy songs, this slot is the complete package from a brand point of view. Everything revolves around the Day of the Dead theme and it gave me some serious Coco vibes.

Then there is the low volatility. Now I know highly volatile slots are all everyone seems to be wanting right now but isn’t it nice to have a little change now and again. Sure the 700x max win might be scoffed at but how nice it is to be able to kick back and actually enjoy all the elements of a particular slot. Maybe even have a chuckle along the way.

This may also be a good wagering slot. Most of the wins were either below or slightly above the bet level. But thanks to the multiplier a few other wins hovered around the 14x. The Golden Skulls also help with pushing up the wins as they also push up the multiplier when they appear.

Browse casinos with Esqueleto Explosivo and other slots from Thunderkick. Create an account and try the game for free before making a deposit.

You can play Esqueleto Explosivo in English, Finnish, Swedish, Norwegian 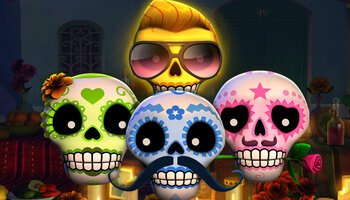