When this slot game by Red Tiger Gaming came along, I immediately thought it was yet another game inspired by Mexican music. I was very much wrong on that front. Instead, you are invited to join the Day of the Dead celebrations and to hit the pay lines in this latest gambling release.

Spread over a 4x5 reel setup and with medium volatility, this is a Mexican festival that you’ll gladly join and go on a happy hunting ground. Featuring classic iconography, a festive event and plenty of colours, this game is a feast for your eyes.

Personally, when this slot game dropped by, I immediately thought of Esqueleto Esplosivo, by renowned software game provider Thunderkick. That game also celebrates the Day of the Dead, so when this slot game came along, I thought it was going to be a copycat. Dear readers, I was wrong!

This dark slot game comes with a pinch of mystery joined by a band of skeletal musicians who want you to help them celebrate this special day. The background is as you’d expect it to be, one of celebration with the mariachi band performing on a starry night. The three Mariachis, The Guitarrista, Trompetista and Maraquero will be entertaining you with sweet music, but also with a variety of random features and the Mariachi Spins feature. The scene of this slot game is based on the rooftop buildings, overseeing the revelries in a small Mexican town.

Red Tiger Gaming kept this game simple with a simple concept for this 2018 release so that newbies can get the hang of this game in no time.

This five-reel slot game also benefits from 40 fixed pay lines with bets starting from as little as £0.20 per spin. Oh, and you can win up to 1,000x the bet.

Of course, this isn’t just a celebration of the Dia De Muertos. There is a lot more to it, so let’s dive into the nitty-gritty details of this game.

As you are probably aware, the Day of the Dead is renowned for its colourful festivities across Mexico, where people put on masks, drink and celebrate this joyous occasion. The party descends into the streets with music and fireworks blaring into the night.

The Masked Girl acts as the Wild to substitute for all other regular symbols, to help create a winning combination. The same goes for the Music Note Wild. The highest paying symbols in the game are the Skull with the roses and candles, the Cactus with the sombrero hat and the Tequila bottle. The lowest-paying symbols are the playing cards.

While I was spinning the reels to this game, I’ll be honest, I wasn’t blown away and found it less than spectacular…. until the Three Dead Musicians showed up. Unfortunately, they are a little hard to trigger, but when the Esqueleto Mariachi show up…wow. The musician features are randomly triggered when one of the three skeleton musicians burst through the special windows on the side.

Watch out for the big mariachi symbols during the base gameplay, as three of these scatters will activate the free spins bonus round. You will win a random number of free spins, to begin with. Whilst I was playing it, I triggered anything between 10 and 25 free spins.

Once you start your free spins round, any one of the musicians can pop out. The Guittarista musician will play his guitar to produce wilds onto the reels with guaranteed wilds.

The Trompetista will play his brass instrument, blowing away symbols off the reels, making room for new ones to fill in the gaps, while the Maraquero musician will shake his maracas with gusto, to nudge the reels up or down in a bit to create winning pay lines.

The game enjoys the same cascading reels function that we have already seen and are accustomed to in Thunderkick’s Esqueleto Explosivo slot game. In my humble opinion, I found the Thunderkick version to exude more charisma. In the Thunderkick version, every time you hit a winning pay line, the skull symbols on the reels start belting out a tune, rattling as they drop off the reels and are replaced by new ones.

It all depends what your preference in terms of game styles is. I prefer more animated slot games which stand out from the crowd. Regardless of my personal opinion, the good news is that the volatility of this game isn’t too high and with regular stacked symbols, the pay-outs can be small, albeit frequently.

I must admit that the mariachis bursting through the windows on the side was a nice touch, and I found myself waiting in anticipation for one of the elusive musicians to show up.

One problem I have noticed is that the bonus round doesn’t come around that much and it is much harder to trigger. What I find that this online slot badly needs though, was a progressive multiplier to add a touch of pizazz to the gameplay.

Although Red Tiger Gaming is not the first software developer to theme one of its slot games after the Day of the Dead, I don’t feel it has brought much to the table to stand out from the crowd. Sure, the graphics are stunning, and the hum of people celebrating in the background gets you into the festive spirit, but there isn’t much more to keep you pinned to your seat. I think newcomers to the online gambling scene would like this game, but it won’t hold experienced players’ attention that much longer.

You can try the game for yourself and see what you think.

Browse casinos with Esqueleto Mariachi and other slots from Red Tiger. Create an account and try the game for free before making a deposit.

You can play Esqueleto Mariachi in English, Finnish, Swedish, German and 16 other languages.

Gail Banavage is a freelancer specialising in content writing, editing and quality assurance for Bojoko. Previously, she has worked for casino operators and affiliates specialising in both Content and SEO and as a writer for various local newspapers and publications.

She has also worked in newspaper advertising for many years and has subsequently had nightmares about dealing with rude customers over the phone.

Gail has more than 7 years of iGaming experience and can write about various topics pertaining to the online gambling industry.

Gail graduated from the University of Malta with a Bachelor's degree in Communications and Sociology. This was followed by a Diploma in Advanced Psychology, Marketing and a Masters Degree in English.

Though she will never learn how to play poker, she is a big fan of Blackjack and likes to heckle live dealers under the nickname ‘Potatoes’.

She is also fond of slot games, most notably games Cosmic Fortune, Jack and the Beanstalk and Blood Suckers.

Before trying new games, she will research payout percentages, in-game features and study the paytable information sheet….as one should.

Gail is the owner of a dog called Buckley, who disappointingly doesn't share her passion for The Smiths. She is also the owner of a Lemon and an Orange tree and although she fusses over them, they've yet to bear fruit. 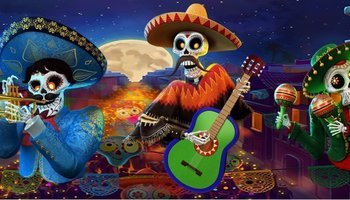 I fell in love with this game. Nice features and when it really gives you the free spins, you will win big! I like the sounds and design, feels almost that you are in a Mexico. I recommend that everyone try this game! ARRIVAAA!