All who dare, come nigh the mysterious stone for the sword that’s lodged inside it can bring about marvellous events on the 20 reels, such as payouts of 500x your bet.

NetEnt’s Excalibur slot stands to match up to the legendary sword’s glory. What I find so captivating about Excalibur are the set of win multipliers, paying scatter symbols, a free spins bonus and the fact that five wilds can bring about a voluminous jackpot prize.

The maximum payout that can possibly occur from a single spin on Excalibur is 7,940x your bet just try not to get your expectations too high because the odds for that kind of a win cropping up are paper-thin.

On the other hand, a more realistic expectation involves medium-sized wins, which the game is able to produce both with major symbols and with four or five minors but with the help of the multiplier wilds.

Hang on tight, because there is more coming about the wilds, as these are what makes players return to Excalibur, even though the game was released back in 2011, which to me feels like the middle ages in terms of online slots.

The title of the game sets the scene for King Arthur and the knights of the round table. Look closely enough and you are going to recognise Merlin, Guinevere, themes of knighthood and chivalry in the high-paying symbols. While these weren’t really drawn to impress, I still like the game even if it is a visual despair for the most part.

In terms of sound, Excalibur comes with a never-ending soundscape of village life -- creaking of wheelbarrows and neighing of horses included, but the sound design is quite on point and I actually find it enjoyable, with the exception of the trumpets which sound as if played by a jester and not a proper trumpeter.

Excalibur doesn’t come with many features, but those that are part of the game feel like they are just enough to help you reach Camelot. This also depends on whether you are going to make a cameo in the game or stay for the long battle.

Whatever your choice may be, keep in mind that the game comes with two wild symbols that can land in the base game and during the free spins bonus, which improves the odds in getting better win outcomes.

The payout structure for each of the standard symbols is quite alright and bets start at £0.20 per spin. Wins for three minor symbols pay 0.25x your bet, while three majors can add 0.5x your bet or more to your balance. Don’t forget that even if most winning outcomes are with three symbols, they can turn into appetizing amounts with the help of the multiplier wilds.

In my experience, the low to medium variance has translated into low wins for the most part, but the game doesn’t leave you high and dry if you’ve decided to play longer. For example, five minor symbols pay 6,25x your bet and any of the pictured characters and events from the Excalibur story pay significantly more.

If you survive through the outdated graphics and those abominable trumpets, you may come to appreciate the potential payouts. I have the feeling that much of what happens in Excalibur depends on whether or not the wild is kindly inclined to you.

One thing that I can say for sure is that wins for two scatter symbols are not an uncommon thing to see, resulting in payouts of 0.4x. The same can be said about the regular wild symbol, it seems more helpful than I thought.

Browse casinos with Excalibur and other slots from NetEnt. Create an account and try the game for free before making a deposit.

You can play Excalibur in English, Finnish, Swedish, German and 21 other languages. 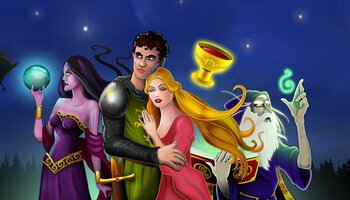