Eye of the Kraken slot review

Play Eye of the Kraken

Eye of the Kraken stuffs us into an old-school steampunk submarine as we dive into the depths to combat the mythical Kraken, looking to free treasures out of its tentacles!

This slot was created by Play ‘n GO and released in 2015 to wide acclaim. I remember playing this game when it first came out and being enthusiastic not just by its design but also by its unique format. This slot has a special 3-row, 3-reel playing field with 8 paylines. However, there are several different adjustments to the game that make it a real blast to play.

Even though a 3x3 playing field can be considered the original slot machine layout, in Eye of the Kraken paylines not only run horizontal but also vertical and diagonally.

Before I get into that, I’ll talk about its presentation some more. It’s a couple of years old by now but the hand-drawn symbols keep looking good. The background shows us deep under the ocean surface with schools of fish coming by or bubbles of air drifting up.

There’s also quite a lot of animation when entering the bonus game which isn’t common in most games even now. All in all, I would say the graphics of Eye of the Kraken hold up extremely well.

The sound design is also of excellent quality, setting the mood with dark music and spikes of frenetic sound when the Kraken shows up to add Wilds or during the bonus game. It very much invokes the sense of being in one of those classic adventure movies.

If you like this type of game but aren’t necessarily keen on deepwater exploring, you might want to give Netent’s Lost Relics a try. Swapping our diving suits for a fedora as the player heads into the deep jungle. Another alternative could be Secrets of Atlantis if you want to stay in the ocean, but would rather explore the safe city of Atlantis!

Something I always appreciate when a slot does this is the inclusion of completely original symbols. Eye of the Kraken does this in style, with both high- and low-paying symbols based entirely on the setting.

That’s quite a lot of symbols for a 3x3 playing field, but luckily the chance to get a win is quite large. The listed Medium Volatility fit my experience quite well.

Eye of the Kraken is full of features, many of which change or activate depending on which game mode is activated. Here’s a short overview of the main features:

The Bonus Game was my favourite addition to the game, sending players down to the ocean floor and having to battle a Kraken. It grasps several chests, some empty and some full. The player gets 3 torpedoes to choose which tentacles to shoot, having the Kraken release the respective chest and hopefully collect their winnings!

This part looks great, with original art and an active component. It’s also the first clear view we get of the monster itself.

The Kraken shows up a few times during the game, but not in the open like that. During the base game, it might appear randomly, adding Wilds to the playing field. It’s a nice teaser to when it finally shows itself.

Eye of the Kraken is one of those slots that will probably stay relevant for a long time. I don’t see the graphics getting too outdated and the unique structure of the slot is rare, which makes it interesting for people who like something other than the classic slot experience.

The features can be a little confusing and I had to spend some time on the paytable to see how the different features interacted with each other. The bonus game showed up regularly enough when I just played for long enough. Meanwhile, the free spins mode almost never triggered for me which was a shame.

I thought it was an excellent game when it first came out and I still think that way now! The unique design gives room to a new playing experience while the bonus game and other features keep the game lively.

Play Eye of the Kraken for free

Browse casinos with Eye of the Kraken and other slots from Play'n GO. Create an account and try the game for free before making a deposit.

You can play Eye of the Kraken in English, Finnish, Swedish, German and 30 other languages. 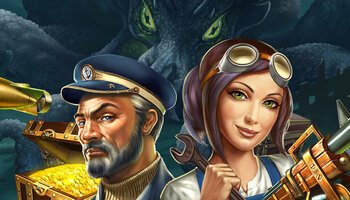