You would think that Fa Fa Twins is a game about a couple of siblings. Even though the twins do appear along the sides of the reel set and are one of the symbols, Fa Fa Twins is more about the twin reels. This is the main feature and it defines the gameplay, which takes place on a dynamic model of 243 ways to win, three rows and five reels.

I consider the game to be well-made and fun to play. The winning potential is rather high, with up to 810,000 coins times your payline stake from a single spin, which is a figure to behold in the event the machine does a full-throttle sequence of payouts. On the other hand, you aren't going to find another highlight in Fa Fa Twins because the game lacks extra features.

Does this mean that Fa Fa Twins is a one-time gig for anyone who might chance upon it? I wouldn't say that outright. I think there is a very good reason why Betsoft hasn't included a free spins bonus or another bonus feature for that matter. In my opinion, it comes down to the style of play. Why burden the dual reels feature with extra gear when it's working fine perfectly on its own? I certainly enjoyed playing it and I believe most players will too.

Fa Fa Twins is set in a traditional Chinese temple where you'd find some of the typical symbols for this setting. I was a bit surprised that I didn't find any dragons, toads or turtles on the reel set, but there is no lack of symbols that are considered auspicious in Chinese culture.

All of the symbols are animated, so when you land a winning combination you can see the work the designers had put in to make this Betsoft release fit for the casino floor.

Even though the theme is quite familiar to me, I find it refreshing that this game doesn't repeat the same old tropes. Even the music is quite original and provides a fitting ambience for the gameplay.

Fa Fa Twins comes with a Wild and that's the only symbol that you can consider 'special'. The symbol is represented by the game's logotype, which substitutes for all other symbols. That's right - all other, because the game lacks a bonus or a scatter.

This brings me to the one and only feature - the Dual Reels.

Each spin results in at least two identical reels. The feature works perfectly with the 243 ways to win. If you land twin reels anywhere on the left half of the reel set, you'd only need one matching symbol or a wild for a winning outcome. If there happen to be two or more matching symbols, your chances for getting a neat win can grow by a fine margin.

The kicker with the Dual Reels feature is that the multiplication isn't limited to two reels. You can get a third, fourth or fifth twin reel. Indeed, it isn't that rare to see a block of three reels with identical symbols.

In this regard, Fa Fa Twins is rather exciting. Most of the outcomes seem like near-misses, which is what I like seeing.

The 243 ways payout system requires three or more matching symbols from left to right on a reel set of three rows and five reels. For those who are familiar with it, there is one caveat - and it's definitely a positive one - the winning combination of symbols can land on any position on the reel.

Frequent winning outcomes are not a given on account of the Dual Reels. You can get two identical reels in the 'right' position so that they can link with one or two matching symbols, but there is a fair share of isolated double reels.

Bets can range between one penny and one pound per fixed bet of 25. There is no need to do any math in this regard because Fa Fa Twins will display every winning outcome as a sum.

On that matter, I can't say that I am too happy with the figures on the paytable. Yes, the Dual Reels feature is part of the base game and one way or another, every potential win consists of two stacked reels, but overall, the paytable has a very weak half.

I get it and you'll get it too if you decide to play Fa Fa Twins: the stacked reels help create more than one win-way, so the payouts from that spin are added together.

It feels good when you get a block of symbols consisting of three or four reels, but if the win-way is made complete by a single symbol, three of a kind pay pennies, really.

Even four matching symbols don't get any better until the lotus flower, which is the first symbol of the high-paying category.

I can get over all of this because the game does strike a balance, however, the wild symbol isn't too eager to make itself useful. I think this is where Fa Fa Twins betrays the balance. You can land big wins and the RTP is decent (95.29%), but the payout frequency can be rather erratic.

And this is precisely why Fa Fa Twins can be fun to play.

Browse casinos with Fa-Fa Twins and other slots from Betsoft. Create an account and try the game for free before making a deposit.

You can play Fa-Fa Twins in English, Finnish, Swedish, German and 22 other languages. 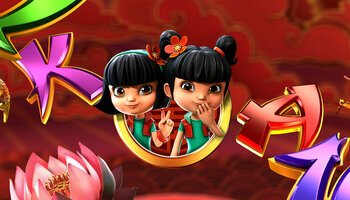