Fairy Gate takes place in a dark enchanted forest where a family of fairies live near a magical gate. This slot offers random wilds, free spins and re-spins to those brave enough to venture to the Fairy Gate.

Created by Quickspin and released in 2017, Fairy Gate is an enchanting slot that has a lot of beautiful art. The background shows us that we’re in a forest, lit up by the summer sun during the base game and covered in a nightly purple hue during the Free Spins mode. The 5-reel, 3-row playing field is filled with a combination of original symbols and card letters. When there’s a win on any of the 20 paylines, the tiles lit up but are unfortunately not animated.

The titular gate also plays a big role in the gameplay, but only during the Free Spins mode. When it’s not activated, we instead see the closed gate while we spin for the appropriate symbols to appear. Everything is very colourful and plays with the idea of fairies, giving them their own face and personality.

The music is lighthearted as well, although a little more energetic than you might expect from a game set in a fairy forest whenever there’s a win. During the normal gameplay the music is a lot more toned down and soothing, using wind chimes, bells and triangles to set the mood.

There are not too many symbols in Fairy Gate, which coupled with the special features results in the game having Medium Volatility. As is common in slots, they can be divided between high-paying symbols and low-paying symbols. The high-paying symbols are all original fairies, with different faces, poses and colours. The low-paying symbols are basic card letters, drawn in a classical font but still not very original. Whenever the Free Spins mode is triggered, random wilds can be added to the game by floating out of the game and onto the reels. I thought this looked excellent.

Players can choose a bet between £0.20 and £100 per spin, with the ability to win the max. win of 532x your bet. That might be low compared to other slots but I found it to feel much more likely I might one day win this than bigger jackpots in other games.

The game has a number of interesting features. I was pleasantly surprised at how often the Free Spins mode activated, as well as the re-spins feature. I wouldn’t say these necessarily always help in getting big wins, but over time I did see my funds trend upwards. Don’t expect a massive win that’ll double your funds instantly but rather a series of smaller wins that average out in the positive.

The Wilds appeared rather frequently but usually only 1 or 2 at a time. That still facilitated wins though so I’m not complaining. With the low payouts for even bigger wins, it was a requirement to make back my bets. The Wilds also look very attractive, plated in gold and standing out from the other symbols.

When it came to the re-spins, they were a lot harder to predict. Sometimes they would trigger several times in a row, other times there would be a lot of spins in between. When they did activate the fairy gate would open and 2 extra reels appeared. These would be mostly empty except for special fairy orbs. If a fairy orb stopped on the screen, they would add the number of Wilds to the playing field that was shown on the orb. This could be between 2 and 5 Wilds.

Obviously, this made the re-spins very interesting since not only did I get an extra spin, there were likely several Wilds added to the screen. It’s possible for more than one Fairy Orb to appear, meaning a number of Wilds per orb. The maximum could be up to 10 Wilds!

Finally, the Free Spins mode activated very often when compared to other slots. There were times I would almost go from one Free Spins mode to the next. Considering the gameplay, it is very similar to the base game with the Re-Spins activated. The Fairy Gate is opened and every spin might add Fairy Orbs to the screen. These then add their number of Wilds to the game randomly.

I found the Free Spins mode to be most beneficial to my funds. They are also the most fun since the random Wilds can turn a disappointing spin into a big win. As I played for quite a while I made some profits, although I can’t guarantee that’ll happen to everyone.

Fairy Gate is an inoffensive slot set in a fairytale setting, using colours and pretty images to keep the player interested while offering some standard but very nicely integrated features. The fact that the features appeared a lot during my time playing made the game more enjoyable overall. I think the same game with the features a lot rarer would have been a lot more boring.

The game is an excellent slot for people that enjoy the classic experience with some extra features thrown in. It’s not trying to think out of the box and it doesn’t try to be a fruit machine either. Instead, it combines some fun features with basic gameplay to create something new.

Players that are looking for high volatility, a big jackpot or top-of-the-line features won’t find those here. The game simply plays like a regular slot and is perfect for people that enjoy that.

Browse casinos with Fairy Gate and other slots from Quickspin. Create an account and try the game for free before making a deposit.

You can play Fairy Gate in English, Finnish, Swedish, German and 23 other languages. 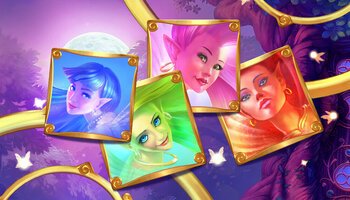