Fairy Tale creates a new story for us to enjoy as we are taken into the sky by three beautiful fairies that give us the opportunity to relax and perhaps bring some coins back to earth. This slot features Wilds and a Free Spins mode.

The game was released in 2014 by developer Endorphina, putting three beautiful fairies into the forefront of the slot. They are all similarly clad in bikinis but you only see their faces during the base game. The background that is covered by the 5-reel, 3-row playing field shows us a wide-open stretch of clouds, placing us high above the world. There are 20 paylines to play with but the game still maintains a High Volatility because of the large number of different symbols.

I thought Fairy Tale looks fine but it is starting to look a little dated. The card letters that act as low-paying symbols are written in cursive and look sharp if unoriginal. The fairies are drawn by hand but seem to be lacking the same sharpness. When they’re part of a win they appear on the screen, animated and granting the coin win.

The sound is fittingly mystical and slow, with a lot of harps and flutes. Activating the bonus game also triggers a special song that makes it feel like an actual fairy tale. The other sound effects are the same as we’ve heard in similar Endorphina slots.

Fairy Tale has a few original high-paying symbols, most of which consist of different fairies. The rest of the playing field is filled with card letters. The wins are all animated but most only consists of the letters showing a sheen or a diamond spinning. Only when a fairy is part of a win does it show her full body on the screen, spreading her wings. I thought that was a nice effect but it happens only rarely.

The payouts for the different symbols varies a lot, with the fairies being quite lucrative even with three-of-a-kind while the low-paying symbols have almost no value. The game offers a max. win of 2,000x your bet which is about average considering other Endorphina slots.

Fairy Tale has only a few features worth mentioning. These are simple variations on those that are common amongst most video slots available today.

The base game is the part of the slot where you will spend most of your time, as activating the free spins mode was difficult to do. The base game doesn’t really offer a lot to talk about. The Scatter Symbols that appear count as Wilds but since they are rather rare they didn’t feel like an actual part of the game in any meaningful way.

Getting 3 or more Scatter Symbols on the screen activates the Free Spins mode. During this mode, the game has 4 cages with birds hanging from the reels. Whenever a special symbol appears on the screen, a golden key, it will unlock one of the cages and activate a multiplier.

This multiplier applies to the last spin and goes from a 2x multiplier to a 5x multiplier. Once the last cage is opened, the free spins mode ends. I thought the fact that you don’t have a set number of spins was nice, but it was also prone to end the mode quickly when the coins just showed up in subsequent spins.

There’s not much more I can say about the features. The Scatters showed up frequently enough during the main game to feel like they helped get some wins. Meanwhile, they were absent during the bonus game which meant it had no Wilds at all to help to create wins. The Free Spins mode was very much hit-or-miss, with sometimes offering dozens of spins and other times less than 10. Considering the rarity of the mode, it didn’t feel like it was worth the effort.

Fairy Tale is a game that looked good when it was released but has since become quite outdated, both in terms of looks and gameplay. The features are paltry compared to other slots and only offer a minimal impact on the game itself.

Players that enjoy beautiful women in their games might get something out of it, even though the outdated graphics detract from it more than they enhance it. The soundtrack is acceptable although I did think it was rather loud.

If you want to give it a try, you can pick a bet between £0.01 and £200 per spin. I would err on the side of caution considering the high volatility. In my experience, it’ll be a slow drain of your funds.

Browse casinos with Fairy Tale and other slots from Endorphina. Create an account and try the game for free before making a deposit.

You can play Fairy Tale in English 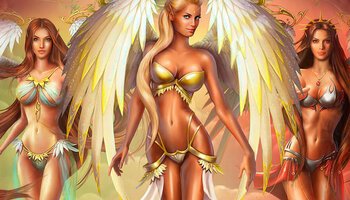