Leave out some pies for Santa, but be careful. Fat Santa may get too big and fill the entire screen with a massive wild.

It is Christmas time again, and now we get to play right where the magic happens. Load up Santa’s sleigh, watch as he takes off and see how he flies around dropping gifts all over the place. This Christmas-themed slot is full of food, wonder and merriment.

Fat Santa was published by Push Gaming in late 2018. This game might seem a bit familiar, as it is a reskin of Push’s earlier game, Fat Rabbit. The only difference, apart from the theme, is that Fat Santa has the Buy a Bonus feature.

Fat Santa is a five-reel slot with five square tall reels and 50 paylines. The game features an RTP of 96.45%, which is a hair above average.

One thing that popped out to me about Fat Santa, was the developers’ emphasis on mobile gaming. The user interface of Fat Santa just screams mobile. This is not a bad thing and will not hinder your experience, but it was just something worth noting.

Christmas is my favourite time of the year, so it is obvious that I love Christmas-themed slots. Fat Santa strikes a nice balance between just plain wintery and overly sappy. You get a good Christmas vibe, but you won’t get annoyed by it.

One key feature that helps is the music. It has some familiar notes in there, but the rhythm is reggae. This makes the music mellow and thematic at the same time. I could easily listen to this for a long time.

When you look at the symbols and especially the characters, you can easily tell that Push Gaming is primarily a mobile developer. Everything has that slightly simplified 3D look, that is very common in mobile games. I do like the look, but it is fairly prominent.

All and all, this game looks good. I like the theme and everything fits. Nothing stands out as being there for the sake of just having more stuff. This is a Christmas game through and through.

The symbols in Fat Santa are well-thought-out. Everything is Christmas-themed down to the last detail. The picture symbols have elves, reindeer, gifts and even a snowman. The minor symbols are card suits, but they are painted on baubles. This is a clever idea to make them more festive.

Fat Santa has two separate wild symbols, Santa and a pie. If you ever happen to get both of them on the reels at once, you activate the free spin feature.

The paytable in this slot is surprisingly balanced. Everything is not stacked up in one end but rather spread out over all of the symbols. Especially when the game has only a medium volatility, the player can expect more frequent wins.

The biggest wins are available during the free spins, but that is not the only way to win. You can get good hits during the regular play, especially when Santa flies by and drops wilds on the reels.

Santa is flying through the air and randomly swoops down to drop off some presents. When you hear the sleigh bells jingling, you know he is coming. Santa will drop a random number of wild pies on the reels.

Pies are wild in Fat Santa, but they aren’t the only wild symbol. Santa himself will show up every once in a while on reel 1 as an extra wild. If you get both kinds of wilds at the same time, you are in for ready a special treat.

Santa loves to eat and he is hungry. If Santa comes down and a wild pie hits the reels at the same time, you activate the free spins. First, you get all the wins from that spin. Then Santa will walk up to the pie, eat it and start up the free spins. You get five spins plus one for each extra pie.

This game is not called Fat Santa for nothing. During the free spins, Santa will always walk up to every wild pie and eat them up. After eating enough of them, he will grow bigger and you are awarded more free spins. It is possible to get a full 5x5 giant Santa symbol on the reels, but this takes 17 pies.

If you don’t like to wait, you can always buy the free spins. The cost is always 80x your wager. When you buy the spins, the game will play a round with a Santa and a pie always showing up. This is needed, as the game has to know where Santa will stand at the start of the free spins.

Fat Santa hits the right notes for me. I like a good Christmas-theme, and mechanically this game has everything I need. I’m not going to say that this has become my all-time favourite, but I am sure to play it again.

One big thing that I liked was the balanced paytable. Combined with a medium volatility, this game usually has a steady stream of decent wins. I didn’t have to wait for the special feature to activate if I wanted to see a big win pop up.

One thing that I would like to see improved, is that the free spins could activate more often. I know that the Buy a Bonus button is right there, but I don’t want to be constantly paying for it.

Browse casinos with Fat Santa and other slots from Push Gaming. Create an account and try the game for free before making a deposit.

You can play Fat Santa in English, Finnish, Swedish, German and 16 other languages. 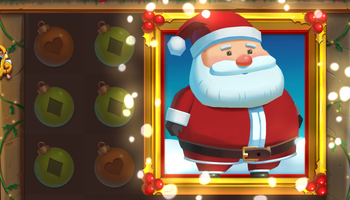