The firebird that guards the nest atop Fenix Play 27 Deluxe can hatch out wins of up to 160x, across a total of 27 ways to win. This is probably the most exciting detail to a simple fruit-themed slot with three reels and three rows, but because it is a Wazdan release, the players can enjoy the potential benefits from an adjustable variance and a gamble feature.

Nearly all of the symbols on the paytable are fruits, which makes it seem like a classical fruit slot. The exception is the few symbols that have a mythological etching. These are the symbols that come with a big win potential, so there is at least one thing that may hold your attention about Fenix Play 27 Deluxe.

The reel adventure takes place on a heap of rocks where the mythological phoenix nests. We don't see the bird in its entirety, but we can get a sense of its might when she flaps her wings to celebrate a winning outcome. In the event the nest shakes and rumbles, a nice touch is added to what is otherwise a game of stale graphics.

In the absence of a free spins bonus, a pick-me bonus, or even a single reel-modifier, there is very little that can make the routine of spinning the reels thrilling. Perhaps some players will give it the benefit of a doubt due to the multiplier feature.

A breakdown of the paytable shows that Fenix Play 27 Deluxe is heavily inclined to generate small-valued wins. There are a total of nine fruit symbols that can pay amounts of 1x, 2x and 4x times the bet.

The other four symbols are stars and sevens, suns and golden coins. These pay 8x, 40x and 80x in that order. Fenix Play 27 Deluxe has a top payout of 160x times the bet, which occurs when three phoenix symbols fall on a payline.

Arguably, this is not the jackpot prize. If the phoenix wild symbol covers all nine positions, you’ll gain a win of 160x times the bet, plus a 3x multiplier.

In all objectivity, this game gave me nothing to get excited about. I don’t think the 160x is worth the wait because you don’t get to see two wilds on the screen that often at all, let alone three.

A theoretical return to player is set above the average, at 96.25% and the volatility is adjustable thanks to the button that lets you switch between Low, Standard and High.

Perhaps those who want to give Fenix Play 27 Deluxe a try can play around with the volatility, set it on high and wait it out for the eventual three wilds or a 3x3 block of the same symbol.

Browse casinos with Fenix Play 27 Deluxe and other slots from Wazdan. Create an account and try the game for free before making a deposit.

You can play Fenix Play 27 Deluxe in English, German, French, Spanish and 6 other languages. 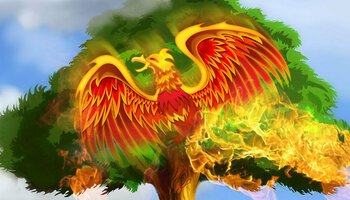