Anyone looking for a simple game with custom-set volatility, no bonus features and a modest maximum payout of 75x your bet, look no further than Fenix Play Deluxe. I was taken aback in the most positive way possible after giving the paytable a single look-over. This is one of the few slots I’ve seen where the two lowest-paying symbols can pay 5x your bet, which is a really sweet deal.

This game is one of the four iterations of the Fenix Play series by Wazdan. Each one comes with minute differences: one version can trigger 81 paylines, while the other has a maximum of 27 paylines. The game at hand has five paylines and a paytable that offers interesting payouts.

This version of the game is as simple as beans. Even though the word 'Fenix' is part of the title, the game does not rise from its ashes. The golden bird presides over the reel-set and beneath it are three reels, which are but a fruit-stand with oranges, lemons, grapes and so on.

This is a fruit pokie in its core, so it comes with a very basic design. The only thing I can find likeable about it comes to the fore when there is a winning outcome. In the event, the fruits are engulfed in flames, the bird gets excited, and the reel-set belches out flame. It's corny, I know, but there isn't much to hold on to here.

The only thing that can occur on the five paylines is the nine different symbols. Fenix Play Deluxe does not have a wild symbol or a free spins bonus. What saves the day is the Gamble Feature, whose potential can be tapped by those who like to take extra risk for a bigger win.

Fenix Play deluxe has a wide range of bets which starts with 10p and ends with a maximum wager of £100.00 per spin.

Players who like to try a different volatility level can press the corresponding button in the bottom-right corner.

Switching between low, standard and high volatility may be a way of nudging the random number generator in a manner that can trigger many small wins, some small and some medium wins, or a whole lot of near-misses with a chance of hitting a big win.

The highlight of Fenix Play Deluxe is its paytable. I can’t think of any other game where the minor symbols make payouts of 5x your bet, so seeing three cherries or lemons is definitely a positive outcome on the reels.

The oranges and plums pay 10x, the bells can bring 20x, the grapes 30x, and the watermelons 40x your bet. A rather sweet prize of 50x is paid for three sevens, and the game's maximum prize of 75x is for three stars on a payline.

It is worth noting that I got more than a single payline win on a number of occasions, so the payouts are not limited to the amounts above.

In fact, the jackpot prize comes with a reel-set filled with stars, but naturally, the odds of that are very slim.

Another one of the positive things that I find about this, and other games by Wazdan, is the above-average return to player (RTP) amount.

Those who think that a slot game should be visually stunning may be missing the point with simple pokies such as this one. I think this game will be liked by players who don't mind testing the odds in a game, as in the long-term, Fenix Play Deluxe may hatch out some big prizes under that bird's nest.

Browse casinos with Fenix Play Deluxe and other slots from Wazdan. Create an account and try the game for free before making a deposit.

You can play Fenix Play Deluxe in English, German, French, Spanish and 6 other languages. 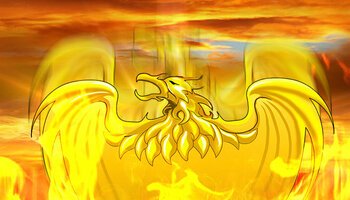