Play Finn and the Swirly Spin

Finn and the Swirly Spin introduces Finn the magical leprechaun as he waits for us at the Emerald Isle with his unique swirly slot!

Finn and the Swirly Spin is a unique slot with its swirling layout. In that regard, I can’t really talk about reels and paylines. The focus of the game is to get 3 or more symbols in a row as usual though, and I found the core idea of the slot quick to pick up.

Originally released in 2017 by developer Netent, Finn and the Swirly Spin has been in the top 10 of my Most Beautiful Slots list ever since. Even now it continues to look amazing, with unique symbols, luscious backgrounds, an animated character, different evocative features and even a city in the clouds.

This game has a sequel released in 2019 called Finn’s Golden Tavern and I’ll even make the bold statement that Swirly Spin looks better than that one!

Add to that a fun, lighthearted soundtrack to really drive home to the theme and if you are the type of player like me that wants to get emersed in a slot you can’t go wrong with this one.

As you can probably tell I could go on gushing about the game’s looks for quite a while, but it boasts a ton of features on top of its appearance so I can’t spend too much time on this part of the slot. Instead, I recommend you give it a look yourself and see how the graphics strike you!

All the symbols in the game suit the setting perfectly without being too extravagant. They are either related to the theme of an Irish leprechaun or designed in such a way they don’t stand out as inappropriate.

The symbols are largely static on their own, but light up and explode when they’re part of a winning payline.

Any time you get 3 or more of the same symbol in a row, horizontally or vertically, it will count as a win. When you get 3 normal symbols in a row this way, these symbols will disappear and a Wild will appear in the middle of where the win was. Then the remaining symbols will avalanche to fill up the gaps.

If a win has a Wild in it, the winning payline will explode around the Wild, which will destroy the winning symbols as well as 1 symbol on either side of it. This can involve more than 1 Wild. When a win with a Wild explodes, it will not spawn another Wild.

The symbols are all well-made and very detailed while fitting the vibe of the slot. The Wilds are stars with eyes, making them even cuter than the game already is.

Netent decided to not only experiment with the design of the slot but also added a ton of different features!

If you’re kind of looking at the list of features in disbelief, I can’t blame you. That is a lot of things to get through. Luckily these are all spaced out fairly well and you won’t have to worry about choosing which feature to focus on too much.

The important ones to keep in mind are the Wilds since they keep the game moving and their exploding quality means that it can shake up a screen that looked like it’d be a bust and turn it into a series of wins.

The Key symbols are always important because if that gets to the centre of the screen, it activates the Bonus Game. You need Keys to unlock the different Free Spins modes but you don’t need to save your keys. The game keeps track of how many keys you have collected while playing and you can freely use them to unlock a Free Spin mode without losing those keys.

Do expect to have to play for a very long time before you have enough though. I played it for a good few hours and only managed to get 4 keys by the end of my time playing. However, the different Free Spins modes get progressively more interesting. Remember, if you quit the game you lose your collected keys.

Finn occasionally helped me out during the base game and granted me a single spin with the special features that are normally part of the Free Spins modes. This gave me a good chance to see how they worked without having to read up on it in the Information section of the slot.

Finn and the Swirly Spin is a massive creative endeavour by Netent. They seemingly went all out on the graphics, the sound and the large assortment of features. The most prominent one being the unique slot layout that might deter some players.

If you are in any way curious to see how it plays I heartily recommend it. The base gameplay isn’t that different from any classic slot and the huge amount of features means it stays interesting.

Special mention to the game’s reported Low Volatility. Maybe Netent has different metrics to judge its volatility than I do, but I had frequent streaks of more than 10 spins without a win which really doesn’t fit low volatility in my mind. If I had to decide myself, I’d consider it medium volatility. Keep that in mind if you want to pick a higher bet. Since you can choose between £0.10 and £200 you can imagine betting too high might deplete your reserves very quickly.

In combination with a rather mediocre max. win of 600x your bet, you should keep a close eye on your coins. If you do what I did and drop down your bet per spin, you can expect a very enjoyable time playing.

Play Finn and the Swirly Spin for free

Browse casinos with Finn and the Swirly Spin and other slots from NetEnt. Create an account and try the game for free before making a deposit.

You can play Finn and the Swirly Spin in English, Finnish, Swedish, German and 20 other languages.

Finn and the Swirly Spin supports GBP, EUR, SEK, NOK and 33 other currencies. 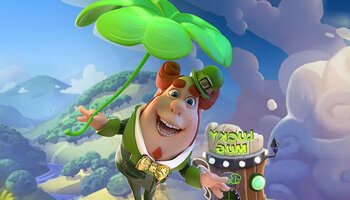