Join Finn the leprechaun for a drink at the noisy tavern and play for a chance to win a max 1,000x your stake, and enjoy great features like Cluster Pays, Fist Slam Bonus, Random Coin Bonus and Free Spins.

Theme and Graphics
The colours, symbols and other visual elements have been tweaked in Finn’s Golden Tavern slot machine to suit its newish theme. But overall it looks very similar to the original slot which contains a game grid that is a spiral of symbols and a backdrop with different visuals to set the mood.

Inside Finn’s Tavern
The backdrop is set in brown tones to portray an Irish wooden tavern. The grid itself is an old map placed on a wooden table, which also has a flute, dice, candle and knife stuck on it. On the opposite side of the grid are a barrel, a coaster with ‘Finn’s Golden Tavern’ written on it, and a compass that will turn into a multiplier counter during Free Spins.

The Sounds in Finn’s Tavern
Finn’s Golden Tavern slot machine’s sounds aren’t too loud and distracting. From time to time you will hear Finn making odd pirate calls such as ‘shiver me timbers’ and ‘ahoy matey’. Also, the crowd gets excited and starts singing and the music gets louder when you land winning combinations on the reels. But for most of the time the Irish flute music and subtle pub chatter in the background just set the atmosphere and compliments gameplay.

Where Did Finn Go?
One of the nicest parts about Finn and the Swirly Spin slot’s design was Finn the Leprechaun sitting in the background and playing his flute. For some reason this charming visual is gone from the backdrop of Finn’s Golden Tavern’s online slot, where instead it only appears on the Free Spins welcome screen.

I personally found Finn and the Swirly Spin slot machine’s design to be a lot happier and more inviting that the sequel.

Features
Finn’s Golden Tavern online slot features NetEnt’s Spiral Reels mechanics. This provides for unique gameplay where the symbols spiral and move towards the core of the grid, as opposed to the reels spinning independently. You need to land vertical or horizontal lines of at least 3 symbols to win.

Wild
If you get a winning combination that doesn’t include the Wild symbol, an eye-patched star which represents the Wild will appear in place of one of the symbols that exploded. In case a winning combination includes the Wild Symbol, it will explore and also destroy horizontally and vertically-adjacent symbols. This makes room for even more new symbols and possible wins.

Free Spins
If a Treasure Chest symbol reaches the centre of the grid, you will get 5 Free Spins. The compass on the left will then turn into a multiplier counter which starts at 1x and increases by 1x with every 5 additional Free Spins.

Random Coin
If you land a Treasure Chest symbol in the spiral’s loop that is closest to the centre, you will trigger the Random Coin feature. This will turn either 1 or 2 low-paying symbols to a randomly-chosen high-paying coin symbol that will increase your win.

Fist Slam
Finn wants everyone in the Tavern to have a great time. So if you don’t win for a while he’ll get angry and slam his fist on the table. This randomly-activated feature will be triggered when 3 coin symbols show anywhere on the reels, and then 1 coin will be moved to replace a low-paying symbol and create a winning combination.

More Irish Leprechauns
If you liked playing Finn’s Golden Tavern, you must try Finn and the Swirly Spin slot which is the first title in the series. For more great Irish luck, check out Rainbow Jackpot, a high-volatility slot by Red Tiger Gaming. And for special, standalone bonus features, head over to spin the reels of Rainbow Jackpots Power Lines.

Bets and Payouts
Bet sizes for Finn’s Golden Tavern online slot range between 0.1 and 500 coins. This low-medium volatility slot has a nice 96.1% RTP (Return to Player) with an attractive max potential win of 1,000x. With a hit frequency of 21.2, nearly every fifth or sixth spin is expected to generate a win of some sort. So together with Free Spins, Random Coins and Finn slamming his fist, the gameplay on Finn’s Golden Tavern slot machine should keep you engaged with great fun and chances for wins that are not always huge, but do occur frequently.

Summary
If you are into Irish charm, Finn’s Golden Tavern slot machine is a great game to play on St. Patrick’s Day, or any other day in the pub or at home. The Spiral Reels and Avalanche mechanics make this slot’s gameplay a unique experience.

NetEnt came with all good intentions of bringing the beloved game mechanics in a freshly-designed sequel. But the mix of pirate and Irish elements end up in a confusing theme, and the dark and unwelcoming background doesn’t help either.

So if you are a true fan of Irish slots, predecessor Finn and the Swirly Spin’s design offers a better Irish Luck theme in my opinion. But with higher potential payout and the same great mechanics and features, Finn’s Golden Tavern is still a good slot machine all around.

Browse casinos with Finn’s Golden Tavern and other slots from NetEnt. Create an account and try the game for free before making a deposit.

You can play Finn’s Golden Tavern in English, Finnish, Swedish, German and 20 other languages. 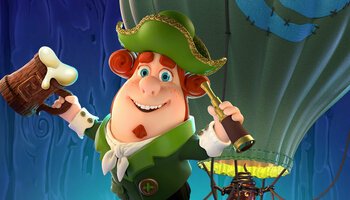