Fire in the Hole slot review

Play Fire in the Hole

Fire in the Hole is an online slot where the weight of the winning symbols makes the mine expand and the payout system is aptly called X-bomb.

The game is about mining and you, as a player, are in the role of supervising an operation that can produce a maximum yield of 60,000x your bet.

There is a lot to cover ahead for Fire in the Hole, but once you start playing, the game has a great feel to it and the winning potential is bombastic.

Upon the first impression, I like what Nolimit City has done with the game. The gameplay combines the explosiveness of a cascading wins engine and the high-pay potential of win multipliers in the bonus feature.

In order to enable a wildly-engaging set of features, Nolimit City had to expand the standard 3x5 layout. Every new spin on Fire in the Hole starts off with three rows and six reels, but the rows can expand for every subsequent winning outcome.

The game can expand on a maximum grid of six rows and six reels and a total of 46,656 win ways.

Nolimit City has given this 2021 release its signature touch. The focus of the design is not so much on the symbols but on the game dynamic. The symbols are fine as they are - a comic book-esque rendition of mining implements and card symbols between nine and king.

My main takeaway from the overall look and feel of the game is that it can get quite dynamic and explosive. The cascading wins and the expanding reel set make it obvious why the payout system is called X-bomb.

If you don't pay attention to the audio track, which is a short tune on a perpetual loop, Fire in the Hole has an amazing flow to it, and for that matter, it's best to enter this mining adventure with a betting limit in mind.

Playing Fire in the Hole in the base game felt like it didn't need any extra symbols. The reason why I think that is because of the hit frequency.

Official specs state one in four spins ends up in a win, and I can agree. Perhaps not exactly one in four, because of the cascading wins mechanic, but the company's information does reflect extensive runs on the game.

That said, the outcomes can get a helping hand from three different Wild symbols. The only extra symbol is Bonus, which triggers the free spins feature.

In addition to standard Wilds, the supercharged xBomb Wilds remove standard paying symbols adjacent to it and add a win multiplier for each winning cascade.

Interestingly enough, Nolimit City has decided to award a reel modifier for aligning between three and five matching symbols that don't form a win. These need to land in the middle of the reel set to qualify as such.

In the event, you can get one, two or three wilds in place of the aligned symbols.

Everything else about the base game is marked by the winning symbol cascades and expanding reel set. You can go from zero to a big win by landing a succession of matching symbols. This is not an extra feature per se, but it definitely defines Fire in the Hole as a game.

You need three, four or five bonus symbols to start the free spin bonus. Depending on the number of symbols, you can start the rounds with either two, three or for rows open.

This is a Hold & Win type of bonus, but with a Nolimit City twist. In addition to the coin symbols, which determine the coin value, the bonus comes with reel modifiers, here called "enhancers" that can post on the topmost row of the layout.

Simply said, these symbols can boost the value of any of the coins that have posted on the respective reel. Landing the "poop" symbol at least doesn't take away from your numbers, it simply does a neutral 1x to the value.

This is the true reel modifier of the bonus game. Dynamites can trigger a number of different reactions, from improving the coin value to removing blocked positions to activating one or more chest at the bottom.

There are three tokens that perform three beneficial math operations. The bag adds all of the coins to the respective reel. The chest does the above plus removes occupied positions. The dwarf token collects all of the values for each spin.

Fire in the Hole can take bets between 20p and £50.00 per spin. There is a reasonable selection of values in the low-stakes area, with increments of 20p up to the £2.00 per spin mark.

A standard option in slot games by Nolimit City is Buy Feature. This option is not available in all jurisdictions. If you decide to go for this, it will set you back 60x or 157x your bet in exchange for a three or four-bonus symbol triggering the Lucky Wagon Spins feature.

Is it worth the risk? I wouldn't know because I prefer using my money to get to the extra feature organically. I think it's well worth the wait and the risk is mitigated by actually gaining from winning outcomes on the way to the bonus.

In terms of payouts, I think Fire in the Hole has a decent-enough value structure for a game with the "cascading wins" payout system - in this case, it is called X-bomb.

I think the potential payout values are good because you can win between 0.2x and 0.3x for three matching symbols, plus eventual winnings from the next cascade. It goes without saying that cascades can become bombastic, literally, and result in potentially huge payouts.

The symbol payouts are as follows:

Fire in the Hole was furnished with a specific payout system that ties together cascading wins with the X-bomb wilds in the base game. In that matter, the game is unique. My favourite part about it is the supercharged Hold & Win bonus, but even if you don’t get to play the bonus, the base game is just as good.

One caveat is that Fire in the Hole’s volatility is in the red zone. Winning outcomes tend to be small but that is only to make room for the long odds of winning a huge prize. 60,000x your bet speaks a lot about its potential. Regardless of whether you want to take the risk, the smallest bet of 20p is a good way to take a look inside the mine.

Play Fire in the Hole for free

Browse casinos with Fire in the Hole and other slots from Nolimit City. Create an account and try the game for free before making a deposit.

You can play Fire in the Hole in English, Finnish, Swedish, German and 12 other languages. 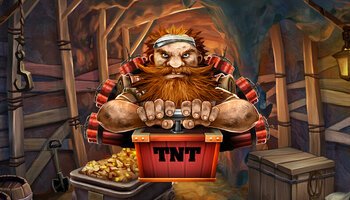