This is another one of Play'n GO's new series of slots that combines the classical fruit theme with the jolly joker. It was released in 2021 and without doubt, it will feel fresh in the time ahead.

I’ve played Fire Joker on many occasions and enjoyed the game thoroughly. I even think it's become a staple in most good online casinos. Fire Joker Freeze is a new iteration with better features and more exciting payouts.

As I expected, the respins feature defines the base game but this time around, there are two jokers instead of one and both are substitute and paying symbols.

Perhaps the max payout potential is "only" 1,000x your bet but the frequency and the sudden bursts of Joker stacks can definitely make for appetizing payouts.

True to the title, Fire Joker Freeze combines both elements of fire and ice. The background and the symbols are almost identical to Fire Joker but the ice Joker can make this nook of hell freeze over for a time until the respin feature completes its run.

The game gets its character from the interaction between the Fire and the Ice joker symbols. Both are lively and always trigger a jolt of anticipation, not least because of the lively visuals they produce. Design-wise, the game is a well-rounded adventure, complete with a funky/electronic tune that I think most players will enjoy.

As I said earlier, the Jokers define the gameplay and thankfully, they are not exceedingly rare. In fact, they do land on the reels quite often.

This respin is the deed the Ice Joker. When one lands anywhere on the reels on a non-winning spin, the game grants you a respin - with the added benefit of a stack of Ice Jokers.

This one is good. In fact, it's a carry-over from Fire Joker.

Land two stacks of the same symbol to get a respin. If a single Ice Joker lands during the respin, it becomes a full stack and triggers the main feature.

This is the most lucrative feature but also one that doesn't trigger often. Think of it as the equivalent of a free spins bonus - it doesn’t trigger too often but for me, it has been worth the wait.

To trigger, you need the reel set to be covered in the same symbol, or get the outcome specified above.

Progressive through the wheels leads to a greater win multiplier - up to 20x your win.

The Fire and Ice Jokers make for dynamic gameplay that brings excitement to the base game.

This isn't your average fruit-themed slot with three reels that lets you wait for action (think- big win events).

I've enjoyed playing Fire Joker Freeze precisely because a single Ice Joker can result in a stack of the same symbol which definitely increases the potential for a win.

The usual for three-reel slot games is to pay for three matching symbols. This is the case with Fire Joker Freeze. Getting two of a kind on a payline can only pay in combination with either one of the Joker Wilds.

You can experience the game with as little as 5p per spin. This is a bit unusual, but hey, the game has five paylines and lets you bet one penny per line.

Out of 10 symbols on the paytable, only three can pay below your bet. This is good, considering the fact that two of the paying symbols are the Joker Wilds.

In fact, both are the top-paying symbols but there are few others that can arrange for a decent payout.

In summary, deciding whether or not to play the game is quite easy. If you enjoyed Fire Joker this version comes across just as good, if not better. The Wheel bonus is the holy grail here.

The maximum prize per spin is fixed on 20x but because of that, the game isn’t shy about triggering this bonus. Nevertheless, it’s another good feature to have in a game of three reels and five paylines.

Browse casinos with Fire Joker Freeze and other slots from Play'n GO. Create an account and try the game for free before making a deposit.

You can play Fire Joker Freeze in English, Finnish, Swedish, German and 30 other languages. 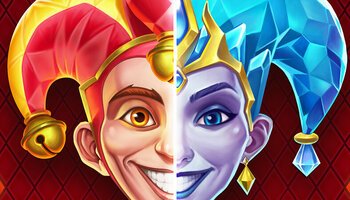