Fire & Steel is an online slot that takes the player into a world of legends and warriors. If you ever wanted to shout like a barbarian but you didn't want to petrify your neighbours, this is one way to go berserk and emerge from the adventure perfectly sane.

I tried Fire & Steel some time ago thinking it is going to be a one-time sitting, but I actually went back to play it a few more times.

The game comes with 20 paylines and five reels, but has a non-standard arrangement of the rows. That makes for a diamond-shaped reel set and these aren’t too common compared to the standard 3x5.

The setting and the graphic design resonated quite well with me. Maybe the game didn't reach the same level of popularity as some of the more recent epic adventure slots (Barbarian Fury comes first to mind). But, fun-loving gameplay is definitely part of the picture.

Fire & Steel has a subtitle "War of the Wilds", which describes the most exciting element of the game. Two different Wild symbols can expand in multiple directions to help improve the odds at landing a better win.

The maximum win potential from a single spin is 1,385x your bet. It doesn't sound like a whole lot, but at least I know that the extra features can make big wins possible.

I find the graphic design to be quite decent, even though only a few of the symbols are fully animated. The art that surrounds the reel set consists of two warriors who are drawn exceptionally well. When their respective symbols interact with the surroundings by creating wilds and there is a big win involved, both warriors shout and cheer at the outcome.

The latter part brings me to the sound design. Betsoft has been furnishing its games with professional soundtracks and Fire & Steel is no exception.

The background track is a somewhat dreary cello melody layered with the sound of the wind. Once you start spinning the reels you will get to enjoy the full impact of a piece that sounds like a military campaign into Orc land.

In my experience with Fire & Steel, there is a blurry distinction between the base game and the bonus feature. This is thanks to the Wild symbols and the fact that they can come into play and impact the outcomes quite often. But lo and behold, it is again the Wilds that are responsible for triggering the bonus.

This is the symbol of the male warrior. When it comes into play, this Wild can launch a beam above or below its position on the reel set and convert into Wilds all of the symbols in its path.

The female warrior Wild sends horizontal beams to the left or right of its landing position. One caveat is that the beam stops after converting two symbols into Wilds, or else it would be too good to be true.

This is the best part of the game. When the Swordsman and Shieldmaiden Wilds become aligned on the same row and their beams connect, Fire & Steel trigger its much-coveted free spin bonus.

I got a taste of the magic and then some more because the Wilds aren't excluded from the feature. What is more, if the two special symbols coincide on the same row again, the game awards you another 10 spins.

Before you embark on your slot adventure you should check out the range of bets and choose your amount. The coin values per payline are between one penny and £1.00. High-stakes players can use the Bet Per Line setting to jack up the bet amount to a maximum of £100.00 per spin.

Regardless of the amount of the bet, each spin plays across 20 paylines and each winning outcome can be taken to the Double Up table. This is where Fire & Steel gives you a chance to play a game of heads and tails and double your winnings for each good guess.

In terms of the potential payouts, I can understand that the high win potential bonus feature needs to be balanced out by several low-paying symbols. The payout structure is as follows:

Yellow, orange and red gems can pay between 0.10x and 1x

Yellow emblem: between 1x and 7.5x

The game provides the player with another possibility for a win, and this comes in a packet with the extra feature. The Wilds can pay 2x, 7.5x and 25x your bet for three, four and five symbols in that order, but you'd need a horizontal Wild beam to strike through the right place. I didn't get this outcome, but I can definitely see its potential.

If you are looking for a game that’s heavy on the Wilds, look no further than Fire & Steel. Even though its look and feel appear a bit dated, the gameplay isn’t. I think the mathematical model reflects medium volatility right down the middle. The thing that I didn’t like is that low-paying symbols have really low values and these crop on the reel set most frequently. Other than that, I think the game is worth checking out.

Browse casinos with Fire & Steel and other slots from Betsoft. Create an account and try the game for free before making a deposit.

You can play Fire & Steel in English, Finnish, Swedish, German and 22 other languages. 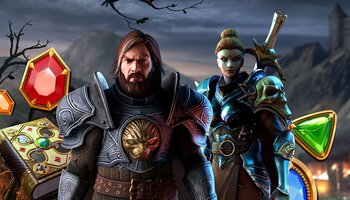