Fire Twenty Deluxe takes its inspiration from the classic fruit machines and makes it into a normal 5-reel, 3-row slot. You won’t be surprised by the simple fruit symbols, nor will the tone-deaf music give you much to listen to!

Developed by Zeus Play, one of the smaller developers out there, the game was released in 2014 which explains the rudimentary gameplay and the simple graphics. The slot is kept very close to the standard gameplay we’ve all come to expect, with 20 paylines on the screen to grant some wins.

There isn’t much I can say about the look of the game as you’ve probably seen it a hundred times before. The different symbols are made up of images of the popular fruits while the background only shows some flames and the logo of the slot itself. The use of colours helps keep the symbols apart but they are just based on the real colours of the different fruits.

If you were hoping for some music that will liven things up, I’m afraid that’s not going to work out either. Fire Twenty Deluxe has a really awful autotuned keyboard song that seems to have taken five minutes to record. Not to mention that every time the reels stop their spin, the music fades out briefly before continuing. Using the autoplay function it meant that the music faded out ever two seconds or so.

The symbols in Fire Twenty Deluxe are the standard complement of fruits and symbols that we’ve all come to expect from standard slots. The images themselves look decent enough, drawn in enough detail to tell apart and sharp even on larger screens. There wasn’t much attention in the shading which I think could have added a bit to the quality.

When there’s a win, which with the slot’s Low Volatility happened quite frequently, the symbols involved are enlarged and the total coin win is displayed on the screen. The symbols also get a little fire animation underneath, probably as a reference to the name.

There’s not much to say about the symbols as they are made to look exactly the same as in other fruit slots we’re already familiar with. The payouts are pretty good despite the low volatility, but I never got many wins longer than three-of-a-kind. The maximum win is 1,501x your bet which I thought was pretty nice but never felt attainable.

Since the game is based on the classic fruit machine there isn’t a lot to mention about the features:

The Wilds are portrayed in Fire Twenty Deluxe as the 7s, only showing the word Wild when they’re part of a win. It’s not the most obvious way to convey the special nature of the symbol but I think it won’t be confusing for players.

In contrast, the Scatter symbol, the Star, has no mention of it anywhere on the symbol at any point during the actual gameplay. The only way to notice is to spot it while playing the game or by checking the paytable. I thought that was a bit strange.

Something that’s different from a lot of slots is that the Scatter symbols don’t act as a way to activate a free spins mode since there isn’t one. Instead, the Scatter symbols are purely used to create wins anywhere on the screen, regardless of paylines. In my experience, they helped create a few wins but it was never a large part of the game.

The Stacked Wilds showed up occasionally but I was never sure if it was a feature or simply the game choosing from the limited collection of symbols and stacking them into a single reel. Nonetheless, I thought the Wilds in Fire Twenty Deluxe appeared often enough to help the player win.

As I played the game, my funds stayed relatively stable while playing with a smaller bet. The low volatility meant a steady trickle of smaller wins without ever offering the prospect of a big win.

There’s not much to say about Fire Twenty Deluxe that hasn’t been said about a hundred similar slots already. The game plays fine on the most basic level, allowing players to spin for wins or using the Autoplay function. The slot offers players to alter their bet between £0.20 and £30 per spin.

The graphics are acceptable but uninspired and simple. Things looking sharp hasn’t really been a positive point for almost a decade by now. The music is simply awful, especially because of the constant fading in and out which made it almost disorienting to listen to.

There are really no features worth mentioning. Players that are looking for a simple fruit machine with 20 paylines and the simplest features will get something out of Fire Twenty Deluxe. Other players will most likely just give it a pass. 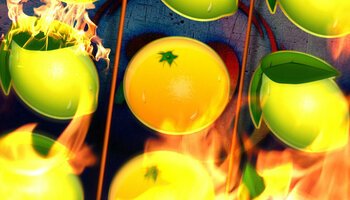