Firedrake’s Fortune brings the usual tale of dragons hoarding gold back to life with another intrepid adventurer trying to make his fortune. Players are invited to tag along in this Kalamba Games slot which features sticky wilds, multipliers and free spins.

The game was released in 2020 and even though the studio that made it is still working on its reputation, it looks like it can compete with bigger names in the industry. The graphics are sharp and detailed, there are a lot of animations and it shows a lot of attention to details. Players will be treated to a 6-reel, 4-row playing field that hosts 40 paylines to win on.

As the name already implies, the slot is set around a pair of dragons who fight both each other and adventurers for their wealth. The game itself shows a strange mountain behind the playing field while a lake is beyond that, so no traditional cave with gold here. There is even the outline of a village in the distance. The characters in the game are either drakes or adventurers wielding medieval weapons.

When there’s a win, the tiles will light up and show the total coin win at the bottom of the screen. The drake symbols are always animated while the characters move around when they’re on a win line. The low-paying symbols are not as movable, and they also aren’t really made to fit the theme they’re a part of.

Firedrake’s Fortune brings the players to an age of combat and skill. The ancient creatures the game revolves around are clearly the most important, showed by having them animated whenever they are on the screen. They can also become stacked, showing off their animations even better. All in all, the game has a lot of movement on the screen.

Players have to deal with High Volatility when they pick this slot. The game has a larger playing field but also a lot of symbols with rather low payouts. There are features that can help generate bigger wins but these are largely hidden behind different qualifiers that make it trickier to have them activate.

If you want, you can pick a bet between £0.50 and £190 per spin which is obviously quite a range. The lower the bet, the longer you will be able to last with your funds and have one of the special features activate. The fortune ones will perhaps get a glimpse at the max. win of 7,408x your bet which is a bit higher than the average for games with similar volatility.

When it comes to the symbols in the game, they are in order from most to least important:

Firedrake’s Fortune uses some familiar features but adjusts them in certain ways to have a unique take on each of them. Don’t expect this slot to reinvent the wheel but you will most likely enjoy the small changes made to the gameplay.

First off a quick look at the features in the game:

During the base game, a tracker on the side of the screen is always filling up. This tracker will count the number of dragon eggs that appear on the screen. If it reaches a certain threshold, special wilds are added to the screen once no more dragon eggs are added in every consecutive spin. If these wilds facilitate additional ticks on the tracker more features can be activated.

These features can make a big impact on the outcome of any spin but they are a bit harder to trigger than the game makes it look. I rarely managed to get past the first wild before it was activated because no more eggs were added to the screen.

The free spins mode will help a bit more when it comes to getting bigger wins as this mode does not require any tracker to be filled up. The different types of wilds are liable to appear on the screen with every spin organically, although they don’t always do. In my experience, the free spins are where you can get the big wins and they helped a lot at keeping my funds stable or even in the positives.

Firedrake’s Fortune brings the adventure of facing dragons and trying to steal their treasure once more to the screen. Even though the gameplay is pretty basic and the idea is nothing new, I think the level of design helps elevate the concept somewhat while actually playing the game is fun and engaging.

Expect this slot to award both casual and hardcore players, but a bit of a condition is required. Don’t blow through your spins in the first couple dozen spins as the game will require some time to have the free spins mode to activate. Once it does though, you might be looking at a big win.

Nothing is a guarantee, especially with slots, so don’t expect too much. Still, even without wins, I found the slot enjoyable to watch and play. There are some elements that could use some extra work, mostly the sound design, but on the whole, it’s a great effort by a smaller studio.

Browse casinos with Firedrake's Fortune and other slots from Kalamba Games. Create an account and try the game for free before making a deposit.

You can play Firedrake's Fortune in English, Finnish, Swedish, German and 9 other languages. 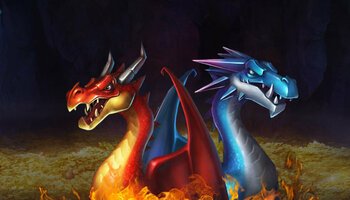