Get ready to have a taste of the catch of the day with Pragmatic Play’s Fishin’ Reels. In this 5-reel, 3-row slot with 10 paylines you will be casting your line for the chance to haul some cash prizes. There is more to be discovered under the turquoise sea. All you need is a fishing line and some patience.

This vibrant slot is a feast for the eyes. It’s as colourful as the Great Barrier Reef. The game is set on the bottom of a sandy shore surrounded by kelp and other seaweeds. In the background, you might also see a shark silhouette making an appearance. The symbols are so charming and the soundtrack inspires an old-time sea adventure. The FX resemble the bygone slot sounds which, in this case, work nicely.

High-paying symbols are depicted by adorable undersea creatures. Low-paying symbols take the form of card suits, but these have been nicely designed to look like underwater treasure.

After each win, all symbols do this cutesy jig with bubbles blowing out of them. It all looks very refreshing, perfectly mirroring the sea theme.

The free spins round comes with two features to choose from. The ‘Reel It In’ feature promises wins that come more often. ‘The Big Catch’ promises big wins. The keyword here is ‘promises’ as I had more than one round of ‘The Big Catch’ where I only got around 5x.

In the ‘Reel It In’ feature, new symbols will be introduced on the reels known as Fish Money. The Fish Money will also have a pre-assigned value between 0.5x to 250x or extra free spins. If on reel 5 the Fisherman makes an appearance he will reel in all the Fish Money and add it to the pot.

During this round, the Big Catch badge will randomly appear on symbols. If 3 or more of these symbols are shown on the reels 2 free spins are awarded and a mini-game will be triggered. In this mini-game, the fisherman will cast his line and try and catch 1 of the 8 bonus fish. Each fish has a value assigned to it and it can be anywhere between 0.5x to 250x. This mini-game can only be triggered a total of 8 times.

I have to admit that I’m a big fan of the style, look and sound of this game. At the start, I was enjoying the gameplay. But then once I triggered the bonus rounds a few times I was left unimpressed. This is probably because most of the time I went for the “win big” option and 2 out of 3 times I barely won 10x.

Things were a bit different when trying the Reel It In feature and I did manage a nice 130x win here. But then I still had to suffer through a 37x and a 5x. You can see the max win potential in both modes but needless to say, it is The Big Catch that turns up the volatility of the game.

So don’t be fooled by the cute imagery, this game is brutal when it comes to volatility, which is set to high. The base game does offer some nice wins and I even managed a 30x win with five-of-a-kind starfish symbols. But do keep an eye out on your funds as these might deplete might quickly before you even step foot into the free spins round.

Browse casinos with Fishin' Reels™ and other slots from Pragmatic Play. Create an account and try the game for free before making a deposit.

You can play Fishin' Reels™ in English, Finnish, Swedish, German and 21 other languages. 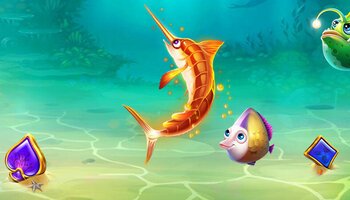