Flame Busters is a slot made to look like one of the old-school Nintendo games that were based on the 2D side view. This game features a group of brave firefighters trying to stop a building from burning down, while also adding free spins, a bonus game and wilds.

This inventive slot was developed by Thunderkick who have been coming up with some creative themes and settings for their games. Released in 2017, the game is still one of the more original ideas I’ve seen in my time reviewing slots. Everything looks exactly like you’d expect from a 16-bit game, with the pixels and animations all adding to the old-school feeling. We’re spending most of our time looking at an apartment building that is on fire, flanked by three firefighters.

There is a 5-reel, 3-row playing field hidden in the building with the windows acting as tiles. Each will show either a coin or a character if there’s not a massive flame bursting out of course. The firefighters on either side will douse any flame that shows up and reveal a hidden symbol. Wins on one of the 243 paylines are displayed through a standard payline on the screen which breaks the immersion slightly.

Luckily the developers went all out and didn’t just stop at the graphics. Instead, they also made sure that the music felt appropriate. You can expect to hear some blocky simple sounds that would fit perfectly in a Nintendo game from the 90s. The sound effects similarly have that low-quality feel so you’re never taken out of the setting.

Flame Busters is based around a burning building with a variety of characters inside who act as the high-paying symbols. These are animated when part of a win, dancing or sipping on their beer. The low-paying symbols are different coloured coins that don’t belong in the setting that well but do fit what you’d find in these types of games.

When it comes to the game itself it has High Volatility which means you will only occasionally get wins big enough to actually make back your spins. Speaking of spins, players can select a bet between £0.10 and £100 per spin which is about average for most modern slots. The best course of action is always to start off slow to see how the volatility really works out before deciding if you want to increase your bets.

To keep players playing or to get them to come back, the slot offers a maximum win of 5,280x your bet. This jackpot is about equal in size to other games with the same volatility. It’s just not very likely players will ever end up with it for obvious reasons. During my time playing, I obviously didn’t hit the jackpot and I found that my funds would keep dropping pretty consistently. There was never a moment I thought I would end up in the positives.

Flame Busters might be looking back in time not just for inspiration for its appearance but also its features since most players won’t find them very surprising. It’s not to say they are bad, however, as they do change up the gameplay in different ways.

The features you’ll find in this game include:

You’ll spend most of your time playing the base game as though it’s not impossible to unlock the free spins mode it’s not terribly frequent either. The base game usually plays like a regular slot. There is a mechanic where a fire will erupt from a window that is then doused by the firefighters. This will reveal the same symbol in all places. In my experience, this would rarely help in getting a win.

The free spins mode feels very similar to the base game. The main difference is that getting enough Scatter Symbols will add more free spins and send the firefighters up 3 stories. There, another low-paying symbol will be removed from the game. It is possible to only end up with the high-paying symbols on the screen which will make it more likely to get a big win. This never happened for me though.

Flame Busters is a beautiful slot that really captures the style and feel of classic arcade games. You’ll see all the familiar pixelated art, the usual sound effects and even the coins are based on popular platformers from the 90s.

The gameplay is a lot less inspired and feels close to what you’d normally get from playing a video slot. There are free spins, wilds and you can win a jackpot. There won’t be much here that will confuse even the most casual players.

I had a good time with this game but mostly for its appearance. As someone who grew up with these types of games, it brought back some fun memories. When it comes to the gameplay it is much less likely to stick in my mind.

Browse casinos with Flame Busters and other slots from Thunderkick. Create an account and try the game for free before making a deposit.

You can play Flame Busters in English, Finnish, Swedish, Norwegian 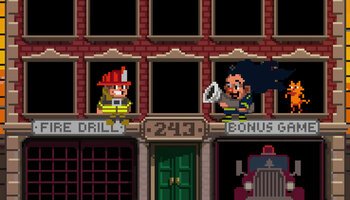