Flamingo Paradise is a slot that is set to bring the player to a tropical paradise where they are surrounded by birds and fruits as they play a relaxing slot. The game includes free spins, sticky re-spins and multipliers next to its summery vibes.

The game was released in 2021 by development studio RedRake Gaming. Although the setting isn’t the most original, I think the designers did their best to give it some personality. Most of the symbols are based around the standard fruit but it’s made to look a bit more realistic and something that you might be snacking on while enjoying the sun on a sandy beach.

In the background behind the 5-reel, 3-row playing field we can see a view of the beach with a comfortable lounge, framed by palm trees. Unfortunately, this image is static and it would have been nice to see some fronds waving in the wind or maybe some of the lights blinking in the distance. The symbols on the screen are also static, only moving slightly when part of a win.

Wins can appear on one or more of its 50 paylines at a time, but these won’t pay out a lot. The game has Medium Volatility for this reason, as there is a wide selection of symbols while also offering more ways to win. To get the really big wins, players will have to depend on the free spins mode and the bonus game.

Flamingo Paradise surprisingly doesn’t make use of flamingos a lot. Instead, other birds mostly make their appearance, as well as an assortment of tropical fruits. Players will be able to see the difference quite easily thanks to the colours and shapes of the symbols. When there’s a win, the winning tiles are lit up and the payline is shown. There is always a counter at the bottom of the screen keeping track of the total win of a single spin.

Players will be able to adjust their bets somewhat per spin, choosing a bet between £0.10 and £15 per spin. This isn’t a lot of choice when compared to most other slots but I found it to be adequate. The volatility does encourage bigger bets for players who are comfortable with the slot, and I found myself seeing my funds grow more often than they shrunk. Obviously, this will be something that can be different for other players.

To keep players interested, the game offers a max. win of 12,500x your bet. This is considerably higher than other slots with the same volatility, and it even exceeds most slots with high volatility. As such, power players might find this prospect to be quite appealing and give this slot a try.

The symbols in this slot are as follows:

Flamingo Paradise offers players a nice selection of features to play with. These are mostly familiar to normal gamers, with the features playing out exactly as they do in other slots. The bonus game is perhaps the biggest departure from the standard but even then it is very similar to the bonus game in some other slots.

To begin with, a quick overview of the different features:

The game hinges around two separate features. The first is the single bonuses that are displayed at the top of reels 1, 3 and 5 during the base game. During the free spins mode, every reel has a bonus. These change with every spin and are activated by getting a Flamingo on the reel. Once this happens, that feature is activated. The features include free spins and Paradise Reels but mostly coin wins.

The Paradise Reels are an enhanced version of this first feature, allowing players to profit from 3 better versions of the bonuses. The Bonus Game is a simple multiplier wheel with the difference being that the wheel is divided into 2 colours and the player has to pick a colour to win before every spin. Picking the right colour will allow a re-spin until they pick incorrectly.

Flamingo Paradise is a very colourful slot that offers a lot of enjoyable sights without going overboard with creativity or animation. I think this could be an even better slot if the symbols had been drawn in a bit more cartoony style, bringing home the idea of it being a paradise for flamingos instead of a paradise with flamingos in it.

The features are more intricate than I guessed at first glance, with the bonuses at the top of the screen and the Paradise Reels feature both competing to give different rewards to the player. They are likely also what keeps the volatility at medium since they offer bigger wins quite frequently. At least, bigger than the regular payline wins you can get.

If you like classic slots with some extra features, or you’re interested in the larger-than-average jackpot, I would recommend this slot. It’s not really a game that strives to do a lot of interesting work with the visuals but it still offers an interesting experience for casual players and experts alike.

Browse casinos with Flamingo Paradise and other slots from RedRake Gaming. Create an account and try the game for free before making a deposit.

You can play Flamingo Paradise in English, Finnish, Swedish, German and 18 other languages. 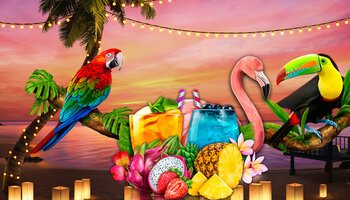