Football: Champions Cup brought to life the championship cup, giving us the opportunity to play with our favourite team and see if we could bring home the trophy!

The game was developed by NetEnt and released in 2016, the year the Euro Cup was played in France. To make it feel more authentic, players get to choose one of the countries they want to represent although this has little effect on the gameplay.

Football: Champions Cup uses a standard 5-reel, 3-row playing field with a modest 20 paylines. The slot looks acceptable but doesn’t do a lot of things that make it stand out. The symbols look simple and are not animated. In contrast, the bonus game has special animations and a unique type of gameplay.

NetEnt took the obvious route when it came to the sound design. The base game is livened up with a constant chorus of supporters cheering their team on. Getting a win results in a thumping bass track and the supporters cheering a little harder. During the bonus game goals make the crowd go wild while misses reward you with a bunch of boos.

Football: Champions Cup doesn’t go overboard when it comes to the symbols. The ones that are there look rather flat and bland, while the lower-paying card symbols are literally just letters. The Wilds, Bonus and Free Spins symbols are lightly animated when part of a payline but all in all I found the game to be rather static. Which was particularly disappointing concerning it’s a game about football!

Football: Champions Cup came out in 2016 which makes it baffling to me how static and simple the symbols look. Compare it to Finn and the Swirly Spin which came out only a year later and has some of the best graphics in any slot I’ve seen so far, also made by NetEnt!

I can’t imagine their creative team made such big leaps in only a year which leaves me with the notion that Football: Champions Cup was more a hastily made slot in an effort to draw in football fans for the Euro Cup, and not a legitimate attempt at creating a good football slot. Comparatively, Bicicleta by Yggdrasil was released in the same year, has essentially the same features but looks considerably better.

Additionally, a large amount of symbols with a low number of paylines means getting wins were rather hard. The game’s High Volatility showed itself quite often because of this. Couple that with the low payouts during the bonus game and free spins mode and there wasn’t much to draw me in. You can choose bets between £0.20 and £100 per spin and although there is a max. win of 2,000x your bet I never felt I got close.

Football: Champions Cup has a few features that I wouldn’t call particularly inspired or original but they do help change up the experience.

The Bonus Game is probably the game mode that stood out the most since it’s the biggest departure from the standard reels. You’re presented with a goal and your job is to pick 1 of the 4 corners of the goal at which to either shoot if you’re the penalty kicker or dive if you’re the keeper.

I found this choice to be completely chance-based, which meant I would often just click on one corner continuously and that would often result in 3 or 4 goals and 1 or 2 saves. The game did not react at all to me picking a particular corner to score or defend.

Getting a goal will award you a coin win while saving a goal will increase your multiplier. If it’s a tie at the end of 5 penalties each it goes into sudden death until one side gets a goal advantage. This doesn’t add anything in terms of extra coins or multipliers, unfortunately.

Although the concept was good, I found myself to be rather detached from the gameplay. I simply watched the spins reel without any opportunity to influence the outcome.

Football: Champions Cup doesn’t feel like NetEnt gave it its all when they developed this game. The symbols are lacklustre, the background is a standard image of a stadium. The soundtrack is almost entirely a recording of a crowd.

The special features help elevate the game slightly above the masses. The penalty kicks were the biggest departure from the basic gameplay with an animated goalkeeper that would dive to the different corners trying to keep the ball out of the net. Unfortunately, the coin rewards for scoring were very low. On the plus side, I did saw the game trigger quite often.

The free spins mode was a lot harder to get into and also saw low returns. I once made it to second place and even with a 2,000 coin win on top of what I had won through the free spins, it still didn’t compensate my spendings to get there.

I liked being able to choose a team to represent but it doesn’t change much except for a little flag in the bottom right corner of the slot and the flag being shown when playing the tournament.

All in all, Football: Champions Cup feels and plays like a rushed game that was created and released to coincide with the Euro Cup 2016. Since we’re well past that by now, I would suggest giving it a miss.

Browse casinos with Football: Champions Cup and other slots from NetEnt. Create an account and try the game for free before making a deposit.

You can play Football: Champions Cup in English, Finnish, Swedish, German and 20 other languages. 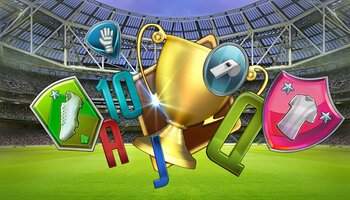