Football is the original title for this Evoplay game that takes the most popular sport in the world as inspiration for a slot with re-spins the player can choose at will and a special free spins mode.

This game, with one of the most thought-provoking names I’ve ever seen, was released by Evoplay Entertainment in 2017, with two attractive ladies in less-than-regular outfits to frame the 5-reel, 3-row playing field. The game is filled with football-related symbols as well as a slightly animated background that shows us a packed football stadium.

The game has a Low Volatility thanks to the mediocre coin value for even the larger wins coupled with the ability to choose to re-spin any reel at any point. During my time playing, I found this slot to grant wins relatively quickly and the sticky re-spins feature allowed me to pick independent reels to try getting a big win.

There are a total of 243 paylines in the game, translating to a win whenever the same symbol appears on consecutive reels from left to right. Meanwhile, the max. win is only a modest 316x your bet.

I thought the game looks well even though it doesn’t really do anything particularly original. I found the sexualised players a little weird since they don’t resemble any real players or outfits, but they do have some nice animations where they kick the ball back and forth.

The slot comes with a peppy, rather exciting soundtrack with a generic but original pop song. Obviously, whenever there is a win you can hear the crowd cheer since that’s the standard in slots about sports. Regardless, I can’t say I hated it and the music fits the slot well.

All the symbols in this slot are original, with them drawing inspiration from what you see in a football match. The symbols are slightly animated when part of a win and very colourful. They look different enough to easily tell apart while not being too simple either.

Thanks to the different shapes as well as clearly distinct items as well as a big variety of colours the symbols create an interesting mix of shapes and colours without it becoming confusing on the eyes. Wins result in a brief animation of the involved symbols as well as a quick flash of the total coin win. If there is a particularly big win, the two players will react in some way, kicking a football across the screen or simply adjusting their pose.

There aren’t a lot of features in Football but they do affect the gameplay in different ways.

The base game is rather simple when you choose the autoplay function. There are Wilds that can appear on reels 2, 3 and 4 which substitute most other symbols. 3 Scatter symbols meanwhile will trigger the free spins mode, which also plays itself.

The real distinguishing feature is the sticky re-spins part, where the player gets to pick any reel during the base game to re-spin. All other reels will not spin, making it possible for a player to wait for a spin where they are one reel away from a big win and then re-spin that one reel to create a big win.

It’s also possible to artificially create a big win by spinning each reel in turn until they get the result they win. The reason this isn’t a good tactic is because each re-spin costs a different coin value depending on the potential payout. That means that the closer you are to a big win the more each re-spin costs without a guarantee that the symbols you want will show up. This can easily end up costing way more coins than just playing the game as regular.

During my time playing, I didn’t really use this feature. It’s definitely an interesting opportunity though, and players that like playing slowly and methodically might be able to get some good value out of it. It will require you to play the game more as an odds calculator than as a relaxing slot.

Football is a slot that takes a very popular concept and makes a nice-looking but rather basic game out of it. The graphics are nice although I didn’t really get the sexy cartoon ladies, as it didn’t feel like the rest of the game was going for sex-appeal. Maybe it was simply to avoid accidentally recreating a real, famous football player.

The gameplay of Football is interesting in that it can be as simple or as complex as you want it to be. Players that just want a pretty but easy slot can just spin the reels, enjoy the Wilds and focus on the free spins once they show up. Power-players might instead focus intently on the sticky re-spins, meticulously analysing each spin to see if a single re-spin might turn a no-win spin into a jackpot.

In that regard, this slot has something for everyone. You can either play it to relax for a few minutes or you can spend your entire evening calculating every spin. Whatever you prefer, you can choose a bet between £0.10 and £500 to fit your playstyle as well as managing the risk.

Browse casinos with Football and other slots from Evoplay Entertainment. Create an account and try the game for free before making a deposit.

You can play Football in English, Chinese 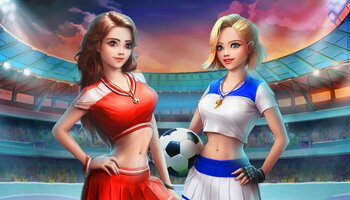