Fortune Fest is a slot based on the Chinese new-year, where copious amounts of fireworks are used to scare away bad spirits and welcome in a new year. The game puts out an interesting mix of tradition and gameplay.

Created by Red Tiger and released in 2016, Fortune Fest is another slot by this developer that has its roots in Chinese culture. It seems Red Tiger has a special connection with this country, which no doubt explains their name and logo! Nonetheless, the creators have attempted to make something original with this slot and I think they did quite a good job.

The game is set during Chinese new-year which means a lot of fireworks and those populate the 5-reel, 3-row playing field as a result. The background shows us a typical square where the ground is absolutely covered with discarded fireworks. Meanwhile, some of the symbols are specifically different types of fireworks while few of them are more generic.

Most of the symbols are static except for the Free Spins symbol which shows us fireworks exploding in the sky. I thought the game was rather bland to look at in terms of movement because of this, but the use of bright red somewhat makes up for that. During the Free Spins mode, there is more movement as the fireworks along the sides of the playing field explode!

The music is painfully generic, diving into the Chinese setting with full confidence and not offering any kind of originality in its sound design. I would have hoped for a unique twist with the use of fireworks in the sound design but unfortunately, we only get Chinese music.

Fortune Fest is another slot in the long line of Red Tiger games where the high-paying symbols are original but the low-paying symbols are simply painted letters to fill the 20 betlines. At this point, it’s plain to see that these letters are the same in every slot with even the colours being the same. Although they are of high quality, I haven’t seen such blatant copying from other developers.

I liked the way the theme dictated the different symbols and they felt like part of the slot as a whole. The obvious exceptions are the letter symbols but we’ll just have to accept them as part of the game! With a High Volatility, the coin value of winning lines is quite high, which is balanced by the fact it’s not as easy to get them.

The features in Fortune Fest I would call simple but effective. Most experienced players will have seen them all in one shape or another, both in different Red Tiger games as well as slots by other developers. Nevertheless, I found them to be quite effective and some of them are downright fun.

The base game isn’t especially interesting, other than the Wilds that show up relatively often. I found that the Wilds are always stacked but don’t always stop to fill the entire reel exactly. Still, it was nice to see them and they would often facilitate a win. A nice thing to note was that there would often be more than 1 Stacked Wilds reel at the same time.

The other feature that can appear during the base game is the Pick Win feature, so-called because that’s the text on the tile. The Pick Win feature lets you, you guessed it, pick a card from 3 cards. Each hides a certain multiplier between 1x and 88x your bet. It also has the possibility of letting you pick again.

During my time playing, I had a few times where I managed to choose the pick again option, which adds up the multipliers you have chosen together. Once you run out of picks the total multiplier value is applied to your coin bet and immediately awarded. The feature is unfortunately pretty rare, just like in God of Wealth, but when it does show up it always promises a win.

The final feature is the Free Spins mode. It didn’t activate very often for me but when it did it was another reasonably sure guarantee to a big win. This is mostly due to the multiplier wheel that appears at the top of the screen. Every free spin you have the multiplier wheel spin too and award a random multiplier to every win you have.

This can either be very lucrative or pretty mild, but either way, I found it to be a good way to increase my funds. Due to the high volatility, this wasn’t a luxury. Players can choose a bet between £0.10 and £80 per spin which can help increase the size of these wins, but I found it risky to bet too high.

I found Fortune Fest to be respectable if a somewhat average slot. It’s the perfect game for players that enjoy the classic slot experience with some modern features. The game doesn’t have too many frills to distract you while the gameplay is quick and fun.

The few features it does have are effective in helping your funds go up, the only downside being that they’re quite rare. Playing for long enough is going to help solve that however, the question is if your funds will be replenishable by that point.

If you’re looking for a slot that offers some good but simple entertainment then Fortune Fest will scratch that itch. The max. win of 1,206x your bet isn’t fantastic but it seems enticing enough to keep playing for a little longer!

Browse casinos with Fortune Fest and other slots from Red Tiger. Create an account and try the game for free before making a deposit.

You can play Fortune Fest in English, Finnish, Swedish, German and 18 other languages. 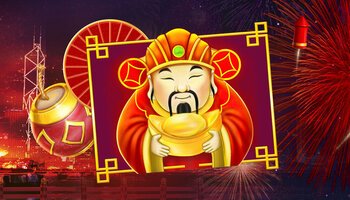