Fortunes of Ali Baba brings the famous thief and scoundrel of 1001 Arabian Nights to the forefront in this exciting slot. The game not only features the rugged good looks of Ali Baba but adds free spins, re-spins and sticky wilds to the experience.

The game was developed and released in 2020 by Play ‘n GO, a studio that has been hard at work making a name for itself. In the last few years, I’ve really started to appreciate most of their slots if only for the visual fidelity they put on display. This slot is no different, giving us some great graphics to enjoy while we play the standard 5-reel, 3-row game. On the reels, we can see Ali Baba as well as different vaguely related items. The background meanwhile shows us the entrance to the famous cave.

Playing the game, the symbols drop down fast and come with subtle animations even without hitting one of the 20 win lines. The dagger’s string subtly moving or the medallion bouncing slightly as the reel it’s on coming to a halt. They’re small details but they help to make it feel alive. Unfortunately, Ali Baba himself is largely static even when part of a win, which I felt was a missed opportunity.

The sound design of the game stays rather close to its Middle-Eastern roots, playing the type of music we’ve come to expect from movies set in that area. The music stays in the background and never really picks up, even when activating any of the special features. The other sound-effects include subtle bells and gongs that signify wins.

Fortunes of Ali Baba gives the player the opportunity to explore the infamous cave together with our main character, while the other symbols depict various items as well as the princess the story is being told by. She acts as a scatter and can trigger the bonus game or the free spins mode. The other low-paying symbols are card letters, detracting from the setting somewhat.

Because of the number of symbols, the times the features activate and the payouts, the game is listed with High Volatility. I think that fits my experience quite well as though the bonus game activates often it almost never offers a big award and my funds would struggle to stay around the starting point. Players can pick a bet between £0.20 and £100 per spin to deal with this, as the game expects people to play it for quite a while before seeing any results.

Fortunes of Ali Baba lets players enjoy a rather standard slot with some extra features that spice it up a bit. I don’t think a lot of players will be surprised by what is included here as they don’t change up the standard features but their combination can be quite enjoyable.

The features work well together, especially starting with the bonus game. During the main game, only the Wilds and Scatters appear. The Wilds can help with creating a win but this was rare and I didn’t see it help create a lot of bigger wins either.

When the game puts Scatters on both reels 1 and 5 the bonus game is activated. We are taken inside the cave and allowed to pick from a number of urns. Every time we choose one we can either receive a coin win, free spins or we collect our total win. This continues until 5 choices are made, when the free spins mode is activated, or when the collect option is picked.

The Free Spins mode works much the same as the base game, except it has an extra type of Wild. This Wild will activate a re-spin which makes all Wilds sticky. It will also start to move towards the Ali Baba Wild, leaving Wilds behind it as it moves. I found this to make the free spins mode very lucrative and a big source of larger wins.

Fortunes of Ali Baba takes a rather popular theme and makes it look and feel somewhat unique. The game doesn’t go out of its way to establish characters or make the player feel like they are really following the adventure, but that doesn’t take away from the immersion offered by the game.

Players who are fans of high volatility slots but enjoy getting wins a little more often will probably enjoy this game since it does offer frequent bigger wins. The game lets players get into the bonus game rather easily which will almost always grant them a tidy coin win, even though I never reached the end of the game myself.

The free spins mode is the best part of the game, but because all the features are put in this game mode it is a requisite for getting the jackpot. This max. win can be 9,968x your bet, which is one of the largest when looking at regular video slots.

Browse casinos with Fortunes of Ali Baba and other slots from Play'n GO. Create an account and try the game for free before making a deposit.

You can play Fortunes of Ali Baba in English, Finnish, Swedish, German and 30 other languages. 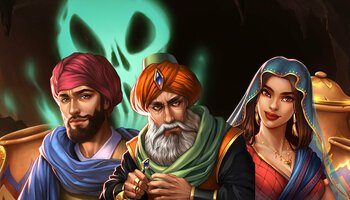