If you want to introduce a different kind of dramatics to your gaming experience, you can call out "It's alive!" every time you pull the lever on the Frankenslot's Monster slot.

Perhaps this is one way to make this particular Betsoft game feel 'alive' because I've had a hard time getting over the fact that the game is not perfect.

As for the basic structure of the game, there are three rows, five reels and 20 paylines and has a payout structure that I find to be rather promising.

Frankenslot's Monster spoofs the famous novel and classical horror flicks featuring Dr Frankenstein and his beloved creation, Victor. Betsoft has done an excellent job in making the grey-skinned thing enthusiastic about the game.

The game is seriously awesome in terms of graphics, but when it comes to the extra features, I think it is missing an X-factor that could have made Victor seamless.

I know, it was intentional, so here are the things that I think Frankenslot's Monster does well and the things it doesn't.

The setting is a gimmicky rendition of the underground laboratory of Dr Frankenstein. On the right side of the reels, we have the crazed scientist who is very eager to see you land winning outcomes and so is his makeshift progeny. These two elements successfully create the visual character of the game and the sound wraps it all together in a spooky melody intoned by a church organ.

That which I think is sorely missing from Frankenslot's Monster in terms of graphic design are different symbols. The picture symbols are already on the sides of the reel set, so why have them as part of the paytable? Unfortunately, I didn't get to see Dr Frankenstein or Victor spring to life on the reel set as often. Nevertheless, design-wise it's a solid game that can bring about both fun and potential winnings.

Betsoft has furnished the game with a standard set of features: there is a Wild symbol, a scatter and another bonus symbol for the minigame.

The Wild does the usual - it substitutes for all symbols, except for the two I mentioned above, but it can also pay for three, four or five matching symbols. The prizes are as follows: 200x, 500x and 1,000x your payline bet.

Three scatters trigger eight free spins, which in turn come with a twist. Victor isn't dancing to the electric current in vain. He is doing it to charge up your win potential because he can turn a random number of symbols into Wild on each spin.

The feature can be retriggered by landing another set of scatter symbols, which raises the chances for making a greater return. I really like the random Wild part of this feature but what I would have loved even more is if one of those Wilds was randomly made to stick.

Three bonus symbols trigger the minigame where you can win an instant prize by tweaking some 'settings' on Frankenstein's monster. The bonus lets you some interactivity in that you can set the levers to a level you deem fit, but once you pull the main lever the game pulls the outcome from its random number generator bag.

The end result can be a maximum win of 25x your bet and seeing Victor dance to the tune of crackling electricity.

I said earlier that Frankenlot's Monster could have been a lot more exciting. Sadly, it doesn't succeed at that because of the bland extra features. 25x your bet as a max win from the bonus game is like, whatever, and the free spins bonus tends to throw a lot of wilds on the right side of the middle reel.

A reel modifier in the base game would have been a great addition, but I guess Betsoft has thought otherwise.

The first order of business when entering Dr Frankenstein's lab is to select your bet. Coin values range between one penny and one pound. If you want to up the ante, there are five bet levels that you can set towards a maximum bet of £100.00 per spin.

The first thing that I noticed was different on the paytable is the absence of winning outcomes for two matching symbols. This is somewhat of a norm for many Betsoft slots, so in that sense, Frankenslot's Monster is the odd one out.

Symbol payouts per payline stake are as follows:

It’s easy to pass up Frankenslot’s Monster. Despite its funky graphics, seen from this point in time the game looks dated. It also doesn’t help that the extra features offer little to get excited about. On the other hand, some of the specs are exceedingly generous.

For instance, the RTP is 96.83% and, as I said before, the payout structure is down to earth unlike most online slots released nowadays.

If you can find the game I’d suggest it wouldn’t hurt trying it for a few spins. It may not blow your mind unless the free spins bonus treats you to a few retriggering events.

Browse casinos with Frankenslot’s Monster and other slots from Betsoft. Create an account and try the game for free before making a deposit.

You can play Frankenslot’s Monster in English, Finnish, Swedish, German and 22 other languages. 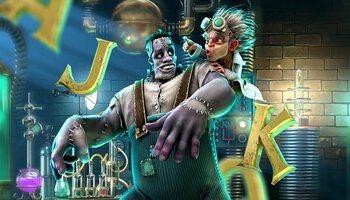