NetEnt’s classic is a mechanically interesting game and a little wacky slot. Just hope you are not the fruit case here.

Fruit Case is an oddball in more than just name alone. It was released in late 2011, which was a big year for NetEnt. It shares a lot of features with that year’s major hit, Gonzo’s Quest, but hasn’t aged as well as Gonzo did.

If you look at Fruit Case and Gonzo’s Quest side by side, you can easily see that Fruit Case is a cheaper version of the same idea. They share a lot of mechanics, but visually they are like night and day.

So, let’s hop back in time and see what this slot has going for it, and why it isn’t as big of a deal as the game it was made to replicate.

The biggest issue Fruit Case has is what is on the outside. It simply looks and sounds dated. There is no question that this game was made in 2011, and looking like that is not a positive thing.

Not to be all doom and gloom, Fruit Case looks clear and neat. You can easily tell which symbol is which, what does it each button do and what all the features and specials are. At no point do you need to check the rules, unless you want some extra details.

Say what you will about the visuals, at least they are miles ahead of the sounds. There is no background music in this game and the sound effects are not much better. All the effects are bland and some get annoying quickly. You are just better off if you simply mute the game.

The special symbols are a big deal here. Not only does it have a blender as the Free Falls symbol, the wild is the real MVP. The Fruit Case wild starts up doubling every win it is a part of, but goes even further. If you are lucky enough with the Avalanche feature, you can get 8x wins for every payline it is a part of.

When you look at the paytable, you can easily see what this game is about. A single win doesn’t do much, but a massive chain of them will. You need to hit multiple wins in a row to make it big. Those wild symbols are going to play a big part in it, especially during the free spins.

Fruit Case has a high volatility and a decent 96.42% RTP. This is a risky game that can reward a lucky player with some good wins. It is not easy to activate the free spins, but if you do, you are in for a treat.

When you win anything, the Avalanche feature kicks in. All the winning symbols are squished and removed from the reels, and new symbols fall from the top to fill the gaps. These can cause new winning combinations, which are then removed and filled again.

With every win, you also increase a multiplier. Unlike Gonzo, this multiplier is not for all wins, but for the wilds. Normally the wilds have a 2x multiplier painted on them, but this can grow up to 8x with the Avalanche feature.

If you get three Free Fall symbols on one payline starting from the left, you activate the Free Spin feature. You will get 10 free spins and can get more during the free spins themselves.

Free Spins are a good way to get bigger wins, as you get a constant 3x multiplier for the whole duration of the spins. The Avalanche feature works normally and the wilds can hand out massive wins with a good chain.

I found Fruit Case to be an interesting slot. Mainly because of its similarities and differences with Gonzo’s Quest.

These two slots were made in the same year and had almost identical features but only one was a major hit and the other faded into obscurity. It just goes to show what the outer beauty can do in this business.

As for Fruit Case, it still remains a common slot that sees some play. It is not a bad game, but it just feels old. If you can get past that, you might have a good time playing it. If you can’t, then just hop on to Gonzo’s Quest and you get basically the same experience with better visuals.

Browse casinos with Fruit Case and other slots from NetEnt. Create an account and try the game for free before making a deposit.

You can play Fruit Case in English, Finnish, Swedish, German and 20 other languages. 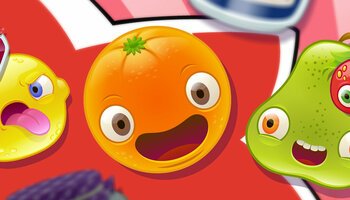