Fruits are good for you, especially if they are dressed in traditional Mexican garb and carry cash prizes. This is the story of Fruit Fiesta, a slot by Wazdan that is as loco as the peak of the Day of the Dead celebrations.

The game at hand has dynamic gameplay that can lead to a jackpot prize of 2000x your bet and few other appealing payouts. This is the reason why I still enjoy playing it, even though it was released in 2017.

I've played my share of Mexico-themed slots and this is one of the most unique productions in terms of graphic design.

Every single one of the fruits has been given a human-like appearance, which results in some ridiculous reactions with each spin of reels. The banana is a mariachi, the lemon is a maracas player, the orange is a pistolero, the wild is a chilli wearing a sombrero, and so on.

The symbols are wired with energy and are making facial expressions regardless of whether the reels are still or moving. Each symbol has been drawn with attention to detail and has its own personality, which makes Fruit Fiesta a slot that is quite entertaining in terms of visuals.

Besides the graphics, the game has a genuine mariachi soundtrack and an array of cool sound effects.

Fruit Fiesta is a typical example of how you shouldn't squander an awesome graphic design by leaving out extra features.

In that respect, the game plays like a classical fruit slot - no free spins, no reel modifiers. But it isn't all bare-bones, because there are two ‘extra’ features, as well as a generous payout potential.

Now for the other fun part that comes with playing this game, the payouts.

There are eight symbols on the paytable that can appear across three rows, five reels and 20 fixed paylines.

The game takes bets between 20p and £30.00 per spin. The beautiful part about playing Fruit Fiesta is that there can be some amazing prizes even with the smallest coin value of one penny per payline (20p per spin): Five wilds can pay £20.00, five sheriff stars £100.00 and five sevens £5.00.

In my opinion, there are very few games that I can enjoy playing with small bets. I’ve played Fruit Fiesta with bets smaller than £1.00 and won payouts that didn’t appear as loose change. Raising the bet to £1.00 results in a paytable that appears a lot more appealing, where the sheriff’s stars pay £500.00.

Even the minor symbols can pay decent amounts. The banana and the potato can return the bet amount with wins consisting of three matching symbols. The lemon, the orange and the pear symbol can pay 0.5x your bet for three symbols, 1x for four and 6x for five symbols.

Fruit Fiesta is both fun to play and rewarding, even without bonus features. The volatility level can be selected by toggling the corresponding button in the bottom right corner, while the theoretical RTP is 96.32%.

In my opinion, big payouts are possible only when you’ve set the volatility to medium or high, but the wait will be longer. Playing any of the smaller bets enables you to try the game and make potentially decent wins.

Browse casinos with Fruit Fiesta and other slots from Wazdan. Create an account and try the game for free before making a deposit.

You can play Fruit Fiesta in English, German, French, Spanish and 6 other languages. 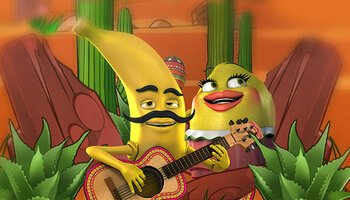