This updated version of the popular Fruit Shop slot was released by NetEnt in 2015, 4 years after its predecessor was released. It boasts some updates graphics, additional sounds and a slight tweak of the features without losing the spirit of the original game. With its 5-reel, 3-row playing field and 15 paylines, it also stays close to the classic slot layout.

I’ll draw comparisons with Fruit Shop during this review for obvious reasons but there are other slots that fit the theme if you’re in the mood. Winterberries by Yggdrasil also puts healthy snacks into the ice. I actually found NetEnt’s Stickers to remind me of this slot a lot too, with its similar colourful symbols and simple game features.

NetEnt stayed close to the original with its graphics, updating the images somewhat but keeping the same style. The biggest change was the inclusion of a snowy theme: adding snow to the different symbols and updating the background. I liked the graphics but they still look very similar to the original.

As for the music, Fruit Shop: Christmas Edition stays very light on sound. When the reels spun I heard a faint rustling like the wind was rushing through the trees in a snowy forest. If I got a win it would play a short jingle but not much more. Only during the free spins mode did it pick up a bit and play an actual song.

Fruit Shop: Christmas Edition only has standard symbols to fill up the reels. There are frozen fruit and high-cards for both high and low-paying symbols respectively. I thought they were nicely drawn but they’re almost the same as those in the original Fruit Shop.

One thing I should note is that the Cherries already pay out a win with only 2 symbols on a winning payline! It’s not much but it is nice when it happens nonetheless.

Fruit Shop: Christmas Edition doesn’t have a lot of features but the ones that are there are at least interesting. First a quick overview:

The biggest feature in this slot was by far the free spins mode. Where other slots are rather conservative with letting players have free spins, Fruit Shop: Christmas Edition has lowered the bar considerably. Getting any win with matching fruit symbols will award you a number of free spins!

The game has a listed Low Volatility which it did feel like, triggering wins every few spins. The free spins would be granted a little less often since they require fruit symbols and the card symbols don’t count. Still, it was fairly regular and obviously way more common than in most other slots.

The developers added a splash screen whenever I hit the free spins mode which slowed it down a little bit but it also gave a nice overview of the number of free spins I had won and afterwards the total coin value I had gathered. I appreciated that they made a special background for the reels when the free spins mode was activated.

If you’re a fan of the classic Fruit Shop, I can’t see a reason you won’t like Fruit Shop: Christmas Edition either. It’s slightly improved upon, has some tweaked features and looks a little more modern. At the same time, it sticks very close to the original concept, which means that fans of the original shouldn’t have any problem getting started.

I liked the free spins feature a lot. I think that many slots are very withholding when it comes to free spins. When a slot like that finally lets you play with some free spins, it often ends up feeling lacklustre. Instead, Fruit Shop: Christmas Edition leans into it and showers the player with free spins. Often, it won’t result in anything but I’ve had times where I got a streak of 20+ free spins. Since the game is so liberal in giving them to players, it feels better when they pay out and it’s not a big deal when they don’t!

The game lets the player pick a bet between £0.15 and £150 per spin, with a max. win of 8,000x your bet. Considering the listed Low Volatility that’s quite a prospect! If you’re just in the mood to play some low-stake spins, the game lets you do that perfectly fine as well.

As a classic slot, this game does everything fine. You’ll get what you’re looking for. As a modern video slot, it’s pretty basic. If you’re the type of player that enjoys playing slots on the computer because of the amazing graphics, features and animations then you won’t get your fill with this game.

Browse casinos with Fruit Shop Christmas Edition and other slots from NetEnt. Create an account and try the game for free before making a deposit.

You can play Fruit Shop Christmas Edition in English, Finnish, Swedish, German and 20 other languages. 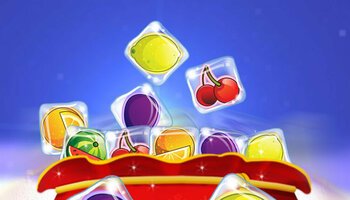