Fruit Warp seeks to take a different look at the fruit machine and try something completely different. Even though it came out in 2014 I still haven’t seen many slots like it. The game features re-spins, a bonus game and non-standard reels.

Developed and released by Thunderkick, this game is something that departs almost entirely from what we would call a slot. Instead of any kind of playing field, we simply see a selection of 9 random pieces of fruit floating in a green liquid, which might be a smoothie of some kind. These fruits are lazily spinning around as they wait for the next spin. As a result, there are no paylines to speak of.

Instead, wins are calculated by the number of a particular fruit on the screen. Any time a player has 3 or more of the same pieces of fruit it will award a coin win. The location on the screen doesn’t matter since the same fruit is always grouped together, even if there aren’t enough for a win. That means you will see wins starting on the left and moving to the right.

It all looks good, even though the game is getting older. The 3D graphics still look nice even when other slots have used similar techniques and made it look outdated. I think this is partially because the fruits keep rotating gently as they float in the liquid. This makes it look more realistic to the human eye. It also reflects light from outside the playing field which helps in keeping the poor textures from being noticed.

Fruit Warp has a name that obviously gives it away and this is a slot that is in the most absolute sense a fruit machine. All of the symbols are different types of fruit, and the most extravagant thing that can happen is that pieces of fruit are changed into different pieces of fruit. If those, in turn, create additional wins you might activate the re-spin feature but I’ll get into that in a bit.

The slot has Medium Volatility which fits my experience for the most part. Wins aren’t very frequent and they don’t pay a lot but there are enough opportunities for bigger wins to appear in the base game. It's not terribly likely to activate the re-spin feature but when it does happen you’re more likely to see bigger returns on it. Players can pick a bet between £0.10 and £100 per spin to play with this volatility a bit.

When it comes to incentives to keep playing, there is a max. win of 11,000x your bet. This is obviously quite massive, especially considering the volatility. A lot of high volatility games offer less than half this prize as a jackpot. If you’re looking for a slot with a sizable maximum win and decent volatility this might be the slot for you.

Looking at the symbols, we can find the following in the game:

Fruit Warp might not look like a conventional slot but it still has some features that mean it operates the same way. These features include:

Fruit Mode features a progression tracker at the bottom of the screen that shows how close you are to activating new multipliers or being granted additional re-spins. Players will continue the re-spins as long as they get the symbol on the screen. With extra lives, the re-spins feature continues even if there aren’t any of that symbol added to the tracker. If it hits the multiplier, all wins from then on are subjected to that multiplier.

It’s a pretty volatile feature that will increase in usefulness the longer it continues. I found that I often managed to hit the first milestone but rarely progressed beyond that. It was a source of bigger wins but even then I found my funds to dwindle over time.

Fruit Warp is an older slot and it has garnered quite a bit of attention over the years due to its unique approach to slot gameplay. Even though it doesn’t try to look like a fruit machine at all it still functions much the same way.

Players that are looking for something that feels totally new but won’t take too long to get used to will probably have a good time testing this slot out. Hardcore traditionalists might find its unique approach a bit too much and might want to avoid it.

Either way, its sizable maximum win is always a nice excuse to give it a try. Even if you’re not a particular fan of the gameplay, the size of the jackpot is still an incentive. Do keep a close eye on your funds as you play as it can drain that quite quickly.

Browse casinos with Fruit Warp and other slots from Thunderkick. Create an account and try the game for free before making a deposit.

You can play Fruit Warp in English, Finnish, Swedish, Norwegian 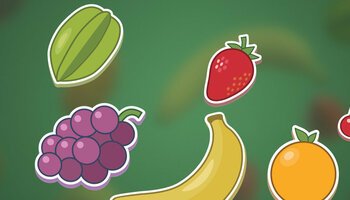